A Reuters photographer said that after the bombing he saw five bodies and four wounded people in the street, and recognised two of them as journalists. 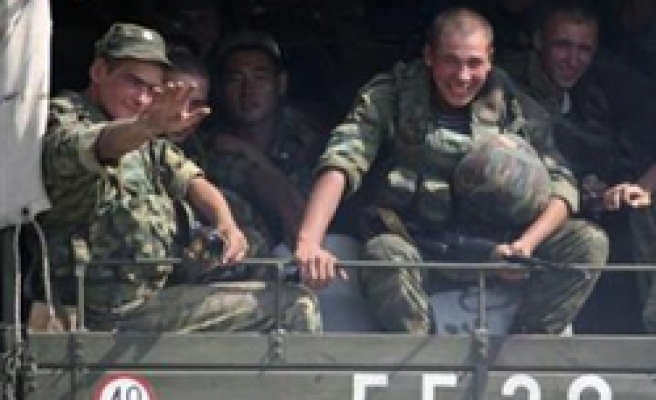 A Reuters photographer said that after the bombing he saw five bodies and four wounded people in the street, and recognised two of them as journalists.

A reporter said the bombs hit without warning as his vehicle drove through virtually deserted streets. All shops were shuttered but a few small groups of residents were seen.

"The bombs hit in front of us and beside us," the reporter said. "Several people were wounded and lying in the street. We got straight out of there."

The reporter said the street was near hillside areas where Russian aircraft had earlier in the day attacked Georgian artillery positions close to the town, which lies about 60 km (35 miles) west of the capital Tbilisi.

The artillery had fired on Russian positions on Monday, but it was not clear if the guns had been withdrawn before a string of explosions peppered the hillside on Tuesday morning.

Georgian troops abandoned the town in some disarray on Monday.

A convoy of civilian cars was seen speeding away from Gori on Tuesday, some of their occupants shouting "They're bombing, they're bombing!"

Two Georgian trucks had collided on a road near Gori, suggesting considerable confusion as people tried to leave.

Two Reuters reporters in the town saw four explosions on the outskirts of Gori earlier on Tuesday, though it was unclear whether these were caused by bombing or artillery fire. Reporters saw no soldiers on the road between Tbilisi and Gori, birthplace of Soviet dictator Josef Stalin. A few abandoned Georgian army vehicles and a burnt-out tank lay by the roadside on the southern approach to the town.