Russian forces maintained positions deep inside Georgia proper, despite Moscow's announcement that it would begin withdrawing on Monday having driven Georgian forces from breakaway South Ossetia. 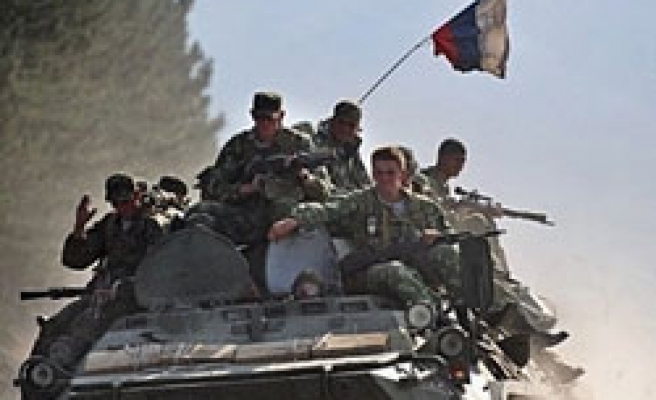 Russian and Georgian forces exchanged prisoners on a highway in central Georgia on Tuesday in a gesture of goodwill despite continued tension over Russia's promised withdrawal.

The 15-minute handover took place 45 kilometres (30 miles) west of the capital Tbilisi, in the village of Igoeti where Russian tanks and armoured vehicles are dug in on the hillside and Georgian police in white pick-ups man a checkpoint.

Russian forces maintained positions deep inside Georgia proper, despite Moscow's announcement that it would begin withdrawing on Monday having driven Georgian forces from breakaway South Ossetia.

Two Russian helicopters landed in nearby fields, and a Reuters correspondent saw several uniformed, unarmed men escorted in single file by Russian soldiers to the centre of the road.

From the Georgian side, the correspondent saw at least one Russian pilot -- shot down during Russian air strikes -- carried out on a stretcher.

Georgia said it handed over five Russian servicemen, in exchange for 15 Georgians, including two civilians. Officials from both sides shook hands and signed a prisoner-exchange at a table set up in the road.

"Everything went according to the agreement," said Major-General Vyacheslav Borisov, commander of Russian forces in the region. "We agreed on future exchanges if there are other prisoners."

Russia's partial occupation followed a brief war between Russian and Georgian forces in South Ossetia. Russia rolled tanks and troops over its southern border to repel an assault by Georgia to retake Tskhinvali from pro-Moscow separatists.

Georgia says around 200 Georgians, not including South Ossetians, died during the fighting that erupted on Aug 7. Russia says 1,600 people, mainly civilians, were killed. The figures have not been independently verified.