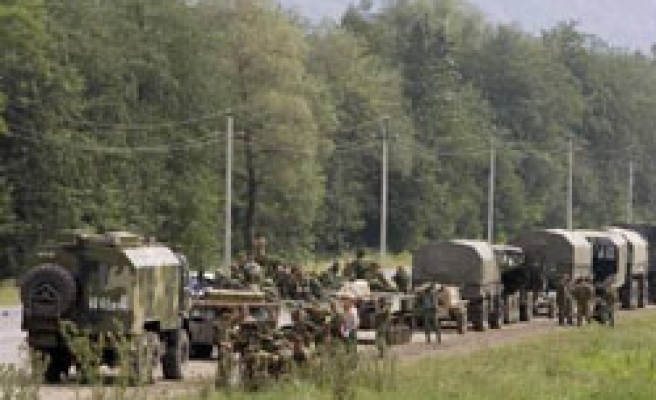 Russian troops have begun regrouping around central Georgian cities, Georgia said on Sunday, ahead of what the West hopes will be a quick withdrawal from the Black Sea state.

A senior Russian commander said troops had begun withdrawing from the pro-Russian separatist region of South Ossetia, focus of a 10-day conflict formally ended by a French-brokered ceasefire. But Russia's defence ministry said no pullback had begun and the commander might be referring to preparations.

Major-General Vyacheslav Borisov, frontline commander around Gori, which lies 30 km (20 miles) beyond South Ossetia, in the Georgian heartland, said troops were already on the move.

"The columns are moving from (the South Ossetian capital of) Tskhinvali to Russia," he told Reuters at the roadside. "You must understand there are a large amount of troops."

He said Russian soldiers were maintaining positions around Gori, a city controlling the approach to South Ossetia and the main east-west highway, to protect Russia's military pullout from Georgia.

"WE WERE THE FIRST IN, SO WE'LL BE THE LAST OUT"

A Russian Defence Ministry spokesman, asked about reports of a withdrawal, said: "It has not started yet ... What is going on is probably just preparation, not actual withdrawal."

The West, concerned about the implications of the Russian invasion for the security of Western fuel supplies from the Caspian, will be looking primarily for signs of a withdrawal of Russian troops from the Georgian heartland. There are few expectations Russian would yield its hold on South Ossetia.

Months of tension between Georgia and Russia erupted on Aug. 7, when Tbilisi launched an assault to seize back control of South Ossetia. Russia said 1,600 civilians, many of them Russian citizens, were killed in the Georgian bombardment.

Moscow crushed the Georgian military in the first invasion by Russian forces of a former Soviet republic since the 1991 collapse of the Soviet Union.

Kakha Lomaia, secretary of the Georgian security council, told Reuters by telephone that some of the Russian force occupying Gori had been redeployed to Khashuri and Akhalgori, effectively widening their presence in Georgia.

"The TV centre in Gori has been blown up and they are now broadcasting Russian radio," he told Reuters.

There have been accusations of atrocities on both sides.

Georgia accused Russian soldiers and "armed gangs" from Abkhazia, the second breakaway region, of occupying more than a dozen Georgian villages and a hydro power plant, and physically abusing and robbing local people.

"The pattern that we see on the ground is unmistakeable," Prime Minister Lado Gurgenidze told the BBC on Saturday.

Russian Colonel-General Anatoly Nogovitsyn said on Saturday Georgian snipers were still shooting in South Ossetia and his forces had engaged a "Georgian sabotage group" near the Roki tunnel, main crossing point for Russian troops into Georgia.

He denied Russian responsibility for the destruction of a railway bridge near the town of Kaspi, which villagers said was blown up by men in military uniform.

The blast severed Georgia's main east-west rail link. Neighbouring Azerbaijan said that had forced it to suspend oil exports by rail to ports in western Georgia.

That served as reminder of Georgia's importance as a energy transit state -- it hosts oil and gas pipelines from the Caspian Sea to Turkey, bypassing Russia.

The conflict has rattled the West. French President Nicolas Sarkozy has mediated a ceasefire, U.S. Secretary of State Condoleezza Rive has visited Tbilisi and German Chancellor Angela Merkel is due to fly into Georgia on Sunday after meeting Russia's president on Friday. Saakashvili condemned the Kremlin at a televised meeting with villagers.

"They didn't manage to destroy the country, to destroy the government, to realise their wishes and dreams," he said, holding a small boy in his arms.