Over a dozen armoured personnel carriers and around 200 soldiers had moved into the Igoeti area on the main highway to Tbilisi on Friday. 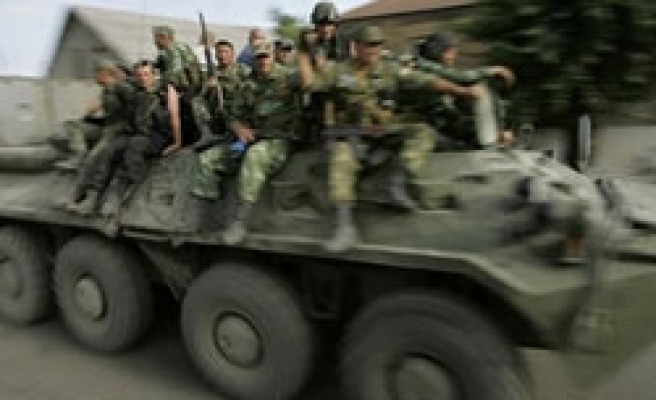 Russian troops withdrew from an area 45 kilometres (30 miles) from the Georgian capital on Saturday, and a foreign military observer said it appeared a pullout from part of Georgia might be underway.

Over a dozen armoured personnel carriers and around 200 soldiers had moved into the Igoeti area on the main highway to Tbilisi on Friday.

This was the deepest incursion into Georgia proper since Russia drove Georgian forces from the breakaway province of South Ossetia last week.

A Reuters correspondent said the Russians had pulled out of Igoeti on Saturday afternoon, back towards the Russian-occupied town of Gori near South Ossetia. Georgian police and army were in the area. The correspondent saw two small Russian checkpoints on the road to Gori.

A foreign military observer, who asked not to be named, told Reuters:

"Our understanding is that the agreement has been signed and Russian troops are starting to withdraw. But there are a lot of units scattered around this area."

"My understanding is that the process will take some time."

Russian President Dmitry Medvedev added his signature on Saturday to a French-led peace plan already endorsed by Georgia and leaders of its two rebel regions.

Russian forces have moved in several areas of western and central Georgia since pushing Georgian forces from breakaway South Ossetia. The Russian military said it has been securing military installations and abandoned arms dumps.

Russian Foreign Minister Sergei Lavrov said on Saturday Russia would pull out troops from the conflict zone once additional security arrangements were put in place.