Sadr calls on Iraqi leaders not to sign US deal 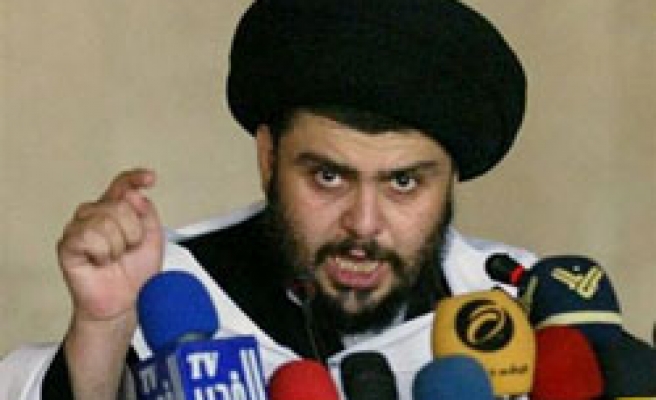 Shi'ite cleric Moqtada al-Sadr called on Iraq's leaders not to sign a security deal with the United States, offering to throw his support behind the government if the talks were scrapped.

The influential cleric, whose political movement controls 10 percent of seats in parliament, has long demanded U.S. troops leave Iraq. Sadr pulled the movement's six ministers out of the government last year when Prime Minister Nuri al-Maliki refused to set a timetable for the withdrawal of U.S. forces.

"I call on Iraq's government not to sign this agreement. I inform the government I am ready to support it via the people as well as politically if it does not sign it," said Sadr, whose Mehdi Army launched two uprisings against U.S. forces in 2004.

Washington wants to negotiate with Baghdad on a new security pact that will provide a legal basis for U.S. troops to operate in Iraq when a U.N. mandate expires at the end of the year.

The White House has said the agreement would include an "aspirational date" to transition the mission of U.S. forces that have been in Iraq since the 2003 U.S.-led invasion.

Iraq has said its vision was for all foreign combat forces to leave by the end of 2010 if security conditions allowed.

The deal was supposed to be finalised by July 31 but U.S. officials have said talks might run into early August.

Sadr urged both Shi'ite and Sunni Arab religious leaders in Iraq to issue fatwas, or religious edicts, against any agreement with the United States.

Sadr backed Maliki's rise to power in 2006 but split with him last year over the troop timetable issue.

Maliki, a Shi'ite, has launched several largely successful crackdowns recently against militias including the Mehdi Army.

In his answers to the questions, Sadr reiterated an earlier call that armed resistance against the United States should be restricted to a select group. He also called on his followers not to attack Iraq's government or the country's infrastructure.