Sadr: 'Open war' directed only at US forces, not Iraqi gov't

Iraqi Shi'ite cleric Moqtada al-Sadr pulled back from confrontation with the government on Friday, asking his followers to continue to observe a shaky ceasefire and not to battle government troops. 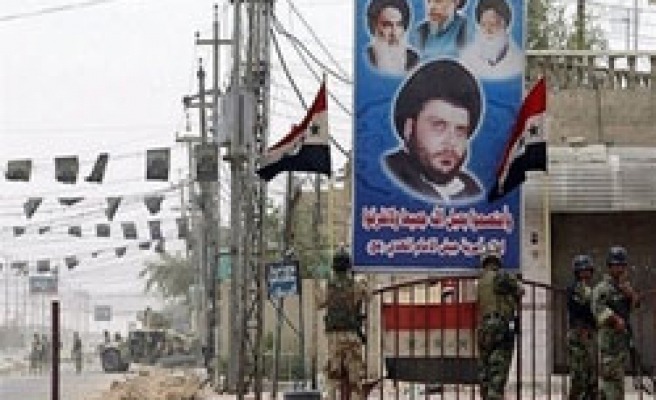 Sadr's, whose call for calm was read out in a major mosque in Baghdad, said his recent threat of "open war" was directed only at U.S. forces, not the Iraqi government.

"You are the best who committed and were patient with the decision to cease fire, and were the most obedient to your leader. I wish you would continue your patience and your belief," said Sadr's statement, read by a cleric during Friday prayers in Sadr's eastern Baghdad stronghold of Sadr City.

Sadr threatened an "open war" last Saturday unless Maliki called off the campaign against his fighters in Baghdad, the southern oil hub of Basra and other Shi'ite areas.

Sadr made clear on Friday his battle was against the U.S. military, not Iraq's security forces. He has demanded U.S. troops leave Iraq.

"My brothers in the Mehdi Army and the Iraqi forces, be a single hand and stop shedding each other's blood. Support all types of resistance in order to have a safe Iraq," Sadr said.

Maliki has refused to back down in his confrontation with Sadr. The cleric supported the prime minister's rise to power in 2006 but has since split with him over Maliki's refusal to set a timetable for the withdrawal of U.S. troops from Iraq.

Maliki has threatened to bar Sadr's movement from provincial elections on Oct. 1 if he does not disband the Mehdi Army.

Sadr's mass movement, which boycotted the last local elections in 2005, is expected to perform well at the expense of parties that backed Maliki, especially in the Shi'ite south.

Many of his followers see the crackdown as an effort to sideline them before the polls and protect groups that support Maliki. The government says the campaign is intended to restore the rule of law in militia-held areas.