Iraqi Shi'ite cleric Moqtada al-Sadr called on his Mahdi army fighters on Sunday to leave the streets and stop battling government forces in Basra and other southern towns. 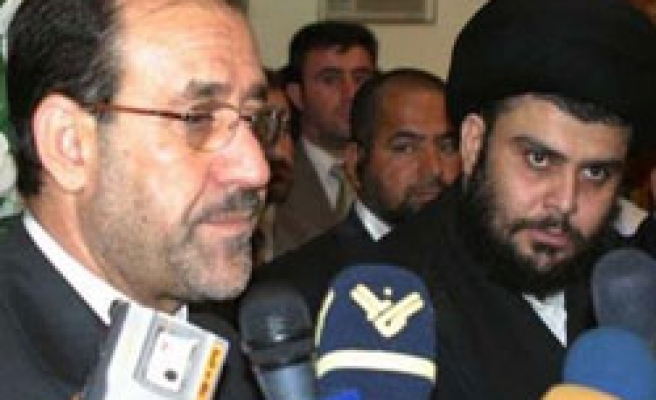 "Because of the religious responsibility, and to stop Iraqi blood being shed ... we call for an end to armed appearances in Basra and all other provinces," Sadr said in a statement given to journalists by his aides.

"Anyone carrying a weapon and targeting government institutions will not be one of us."

Not handing over arms

Followers of Shi'ite cleric Moqtada al-Sadr will not hand over their weapons as part of a move to end a week of fighting in Iraq, a top Sadr aide said.

The aide, Hazem al-Araji, also said that Sadr's followers had received a guarantee from the government that it would end "random arrests" of Sadr followers.

"The weapons of the resistance will not be delivered to the Iraqi government," he told journalists at Sadr's office in the holy city of Najaf after distributing a statement from Sadr calling on followers to stop fighting.

Sadr's statement also called for the government to halt arrests of his followers and implement an amnesty law to free prisoners.

"We confirm that there were guarantees taken from the Iraqi government to fulfill all the points in this statement. Thus, no more random arrests," he said.

The Iraqi government launched a crackdown on Sadr followers in the southern city of Basra last week. Prime Minister Nuri al-Maliki ordered them to surrender and has offered cash in return for heavy and medium weapons handed over by April 8.