The 800-metre wood and iron tunnel, which opened on July 30, 1993, was the city's only direct link with the outside world: through it passed weapons, food, the wounded and supplies. 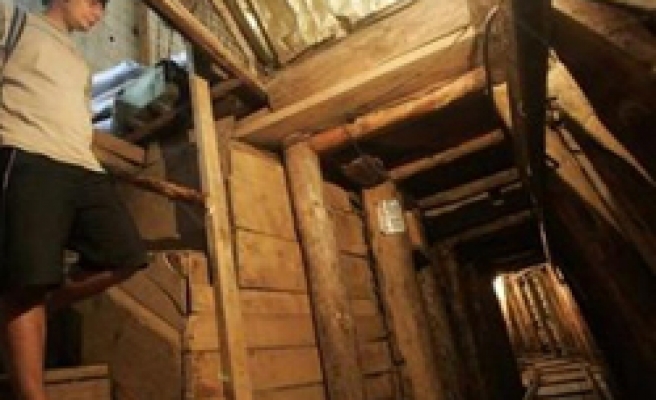 The narrow tunnel that ran beneath Sarajevo airport was people's only escape route during the longest siege in modern history, a symbol of a brutal war that split families and pitted neighbours against each other.

After marking the 15th anniversary of the now largely destroyed tunnel's opening, some in the capital of Bosnia hope to reconstruct the passage which meant escape or at least brief relief from desperate times. Yet the sensitive project lacks funds and they say it may be an opportunity for foreign investors.

"It should be reconstructed to remember those times and show Bosnians and the world how we lived, how we survived," said Ismet Hadzic, a general during the war who ran one half of the tunnel. "If the city rebuilds it, it would become the premier tourist destination in the city."

Like Vietnam's Cu Chi tunnels or the Anne Frank House Museum in Amsterdam, the tunnel that helped ordinary people survive in Sarajevo through more than 1,000 days under siege embodies the local spirit of resistance.

But even as Bosnia slowly recovers from the 1992-95 war, its government is still divided by ethnic and religious tensions. For some, memories of Sarajevo's bloody past are still too raw and its economy too battered to contemplate such a venture.

During the war, Bosnian Serb forces surrounded Sarajevo, a city that once boasted of tolerance between Muslims, Orthodox Serbs, Catholic Croats and Jews.

About 14,000 people were killed during the siege, according to Norwegian government-backed research by the Sarajevo-based Investigation-Documentation Centre.

Sarajevo's population of about 350,000, of which about 90 percent are now Muslims but still includes Serbs and Croats, has made significant progress in rebuilding since then. Yet nearly 40 percent of Bosnians are still officially unemployed.

Tourism is growing as an economic force. A 2007 report by the World Travel and Tourism Council estimated that almost 12 percent of Bosnia's economy is linked to travel and tourism, and war sites are among the attractions.

Last year, more than 119,000 international visitors came to the Sarajevo region, up from fewer than 90,000 in 2005, according to the Tourism Association of Bosnia and Herzegovina. More than 1 million visited the house in Amsterdam where Anne Frank and her Jewish family hid from Nazis in World War Two.

Bosnia's inefficient politics could complicate rebuilding the tunnel, but local officials are optimistic. "We have political agreement from all parties," said Damir Hadzic, mayor of the Novi Grad district of Sarajevo. "We are going to start rebuilding next year."

The 800-metre wood and iron tunnel, which opened on July 30, 1993, was the city's only direct link with the outside world: through it passed weapons, food, the wounded and supplies.

The structure connected a residential part of Sarajevo far from the centre with a more rural area beyond the airport, whose runway was controlled by United Nations forces. Many died coming and going as Bosnian Serbs shelled from afar.

Those who made the trip recall stumbling hunched below the roof, carrying back-breaking packs in a claustrophobic space dimly lit and often partially flooded.

Almost all the tunnel was destroyed after the airport was rebuilt, although about 25 metres are still intact. That final stretch exits into the Kolar family home on the far side of the airport, where a year after the war they opened their own Tunnel Museum.

Visitors to the museum, reliving the abbreviated tunnel crossing, still risk bumping their heads on low rafters but unlike Sarajevo citizens then, do not have to wade through water or suffer a shortage of air.

Great-grandmother Sida, who once handed cups of water to those arriving through the tunnel, still wanders around the property, wearing a headscarf.

The Kolar's home bears many scars of bullets and shells. Edis Kolar, 33, remembers how one day a shell killed nine people in the room near the entrance where he was sleeping: "Even I wouldn't come here if this wasn't my house," he said. "It is maybe too early to remember."

To mark the 15th anniversary, the tunnel's builders and Bosnian fighters who used it gathered for a ceremony. Many had several-day old beards with rugged faces and solemn expressions that suggested they had seen many horrors in their lives.

They opened the ceremony with a moment of silence for the dead and lifted palms upwards in Muslim prayer.

Hajrudin Ibrahimovic, the Sarajevo region's minister for war veterans' affairs, said he wanted to restore part but not all of the original tunnel. "The tunnel needs to be reactivated," he said, but added that a complete reconstruction was not needed.

"It could be a joint venture with a foreign firm," he said, adding such plans are just an idea. "They would get a concession or something like that."

Even supporters of the idea are unsure if they will be able to attract foreign investment. Continued political uncertainty 13 years after the end of the war has kept investors wary, even as tourism has grown.

Some Slovenian and Austrian firms have put money into Bosnian tourism, but an Austrian investment in Sarajevo's best-known Holiday Inn hotel is now under legal dispute. Libya earlier this year pledged to invest 500 million euros in Bosnia, including in hotels, and others have expressed an interest in spa resorts. Still, foreign investment is not flooding in.

Ibrahimovic estimated the rebuilding cost at 2.5 to 5 million euros ($7.73 million), although some city officials say the project could cost twice as much.

Others say visitors who did not live through the war need to experience the full wartime length of the narrow tunnel. "Twenty five meters is not enough for people to remember how we suffered in the war," Kolar said.

"If people think about the past, we couldn't have wars," he continued. "We forget what happens to us every 50 years."

For years, few other than NATO soldiers and visiting delegations visited the museum, and the authorities have never officially recognised it. Yet recently on summer days it has attracted 50 to 100 visitors who pay 2.5 euros admission.

Dignitaries, and actors including the current James Bond Daniel Craig, have come. "Please don't let the world forget," Craig wrote during his visit.

Still, some local people say Bosnia is too retrospective, with items about war anniversaries frequently leading television news and press. Despite Sarajevo's progress, some buildings remain in ruin and many badly need costly repairs.

The Sarajevo International Airport's central runway runs along the remnants of tunnel. Airport General Manager Bakir Karahasanovic said he had crossed the tunnel often during the siege and it could be rebuilt without disrupting the runways.

"No one who was in the war would be against rebuilding it," he said. "It was our only way of surviving."