Sarkozy and Royal to debate on TV

France's presidential rivals began a crucial final week of campaigning Sunday with big rallies planned ahead of a prime-time television debate that could be decisive in the battle for the Elysee. 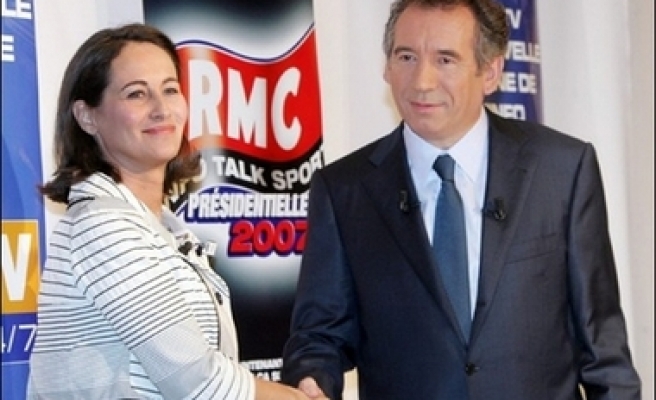 France's presidential rivals began a crucial final week of campaigning Sunday with big rallies planned ahead of a prime-time television debate that could be decisive in the battle for the Elysee.

Frontrunner Nicolas Sarkozy will address supporters at a Paris sports stadium, a day after his Socialist rival Segolene Royal held a high-profile meeting with defeated centrist Francois Bayrou in a bid to win over his supporters.

Royal, who wants to become France's first woman president, did not get Bayrou's backing but the televised encounter allowed her to stress areas of agreement with the centrist who won 6.8 million votes in the first round.

Sarkozy, the rightwing candidate of President Jacques Chirac's governing party, said he was "open to a dialogue" with Bayrou and to continue working with his party if he is elected on May 6.

"We can perfectly govern together," Sarkozy told a television interview. "Moreover, that is what we have done for the past 20 years."

As the race entered its final stretch, much attention focused on the television debate billed as the high point of a campaign that has been dominated by calls for change after 12 years under Chirac.

More than 20 million viewers are expected to tune in to the major television networks on Wednesday for the two-hour debate, with Sarkozy coming under close scrutiny following criticism that he is too highly-strung to be president.

In a television interview on Sunday, Sarkozy said he would approach the presidential debate "with respect, but also with firmness", adding that he would not tone down his stance and bow to a "macho view" that "you cannot debate with a woman in the same way that you would with a man".

"The issue for the French people is not whether to elect a man or a woman, but to have someone who carries weight, who has experience to take on these responsibilities and who has a clear plan to resolve the problems of the French people," he said.

Royal separately said "the debate will be important and it will be difficult", noting that 200 polls had put Sarkozy in the lead since the beginning.

"There will be a clear confrontation, and no one will play the victim," she said in an interview with Canal Plus television.

The latest poll showed Sarkozy would beat Royal in the runoff with 52.5 percent of votes compared to 47.5 percent, even though the Ipsos/Dell survey said Bayrou's voters preferred Royal to Sarkozy.

A separate Ifop poll showed that 74 percent of respondents believe Sarkozy will be the next president against 18 percent who think Royal will move into the Elysee.

French voters are choosing a successor to Chirac in an election that will usher in a new younger generation of leaders who have promised to modernise the nation.

Sarkozy, 52, has centred his campaign around such themes as the work ethic, national identity, immigration and economic liberalisation.

Sarkozy won around 31 percent of the vote in the April 22 multi-candidate first round while Royal scored nearly 26 percent. Last Mod: 29 Nisan 2007, 17:55
Add Comment