Sarkozy began to speak like US president Bush. In his victory speech, he talked about "fundamentalist Muslim oppression of women, freedom, overcoming hate,democracy promotion, strong support for Israel." 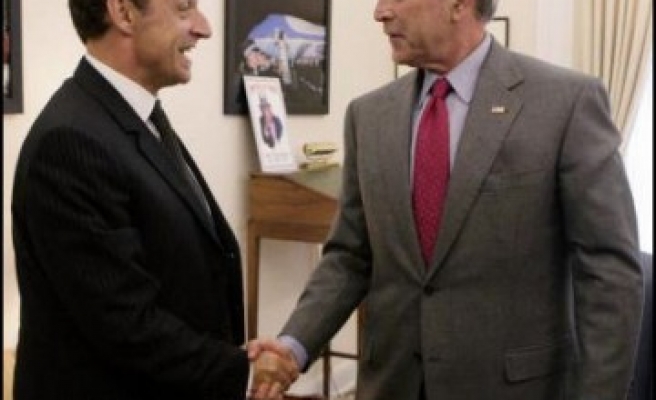 President-elect Sarkozy began to speak like US president Bush. In his victory speech, he talked about "fundamentalist Muslim oppression of women, freedom, overcoming hate,democracy promotion, strong support for Israel." As it seems, the world gained a new neo-con President from EU after French Presidential election.

To the world, President-elect Nicolas Sarkozy sends this message: France is back. Sarkozy said in his victory speech that his France will stand up against tyranny, dictators and fundamentalist Muslim oppression of women — a global vision more in line with President Bush than Jacques Chirac, who defied Washington over Iraq.

Sarkozy has won the label "Sarko the American" for openly admiring the get-up-and-go spirit in the United States, and indicated that he would toe a less-accommodating line toward the Arab world than his predecessors — whose close ties to the Middle East were rooted in France's past as a colonial power in the region.

Overall, though, his campaign gave short shrift to foreign policy, and his limited international experience has left many wondering how he will steer France in global affairs.

Sarkozy sought to quell that uncertainty in a speech barely 30 minutes after his electoral triumph.

France, he said, will stand alongside "all those persecuted by tyranny, by dictatorships." He reached out to "all those in the world who believe in the values of tolerance, freedom, democracy and humanism."

"France will not abandon women who are condemned to the burqa," the full head-and-body covering worn by women in Afghanistan and some Muslim women in Britain and elsewhere, he said. He did not elaborate on how that would translate into policy.

Sarkozy was a member of the government that instituted a law banning head scarves and other religious wearings in classrooms.

In his speech, he appealed for all warring parties in the Middle East to "overcome hate."

"This is a new generation," Francois Heisbourg, a leading expert on French strategic and foreign policysaid. "It is a clear change. It is values rather than interests. He talked about what the Americans would call 'democracy promotion.'"

Both Chirac and Sarkozy say the U.S.-led war in Iraq was a mistake, and the president-elect has called for a deadline for a U.S. pullout. But Sarkozy has not let that dampen his enthusiasm for the trans-Atlantic relationship: He eagerly met with Bush in September, drawing criticism from a populace that has had a complex and sometimes bumpy relationship with the United States.

He has also indicated that he would oppose war against Iran, although analysts predict he will stake out a tough stance in the coming weeks in international efforts to keep Iran from developing nuclear weapons.

The most obvious shift is likely to be felt in the Arab and broader Muslim worlds. Sarkozy has reached out to France's 5 million Muslims, but he also has been more open to Israel than Chirac; his support among French Jews was very strong.

"He has abandoned whatever remained of France's Arab policy," said Olivier Roy, a specialist on Islam at the National Center for Scientific Research. "It will mean less activism in the Arab world. He has chosen a position like the American neo-conservative position."

In Algeria, observers braced for possible tensions with Sarkozy. Algerian daily El Watan turned his speech on its head, saying Monday: "The strong image of a humanist and democratic France will suffer a terrible blow with Nicolas Sarkozy."

Roy said Sarkozy's burqa message was aimed as much at a domestic audience as a foreign one. "It was a statement against fundamentalism," he said.
Last Mod: 08 Mayıs 2007, 18:30
Add Comment