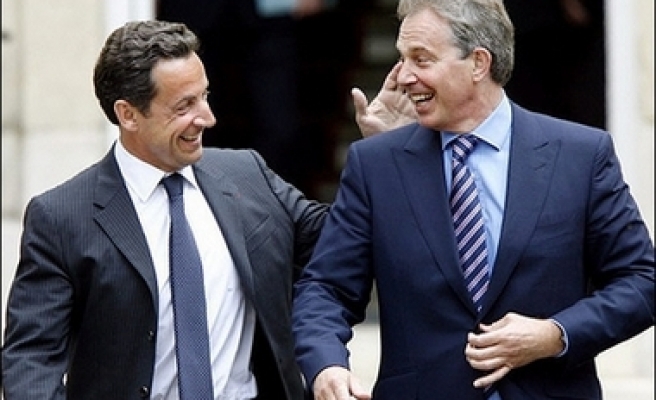 The two men met at Sarkozy's temporary offices on Paris's Left Bank for discussions that focussed on the future of Europe and global warming, aides said.

They were joined by Francois Fillon, Sarkozy's election campaign director who is expected to be named as prime minister at the end of next week.

Talks were to be followed by a dinner in a top Paris restaurant, after which Blair was to fly back to London.

Blair announced Thursday that he will resign at the end of June, so the two men will coincide in office for only six weeks.

Aides said Blair's discussions with Sarzozy centred on preparation for next month's EU summit in Brussels, where the fate of the bloc's proposed constitutional treaty will be under scrutiny.

Sarkozy has proposed a slimmed-down treaty to replace the text that was rejected in French and Dutch referendums in 2005, but he has run into opposition from several countries that adopted the original.

British officials said that Blair -- who will attend the EU summit days before leaving office -- backs the idea of a simplified treaty, but that there is large scope for disagreement over what should remain from the first text.

The two men also disagree on the question of Turkish membership of the EU, which Sarkozy opposes on the grounds that it will scupper European political union.

Blair also briefed Sarkozy about his likely successor as prime minister, Chancellor of the Exchequer Gordon Brown, who is reputed to have deep reservations about the EU project.

Brown is opposed to Britain adopting the euro and press reports suggest he could veto efforts to revive the EU constitution.

Sarkozy, who came to power on a promise of liberal economic policies, has met Blair on several occasions and openly admires British reforms of the labour and welfare systems.

The meeting with Blair was seen as symbolically significant because by tradition a new French president's first meeting is with the leader of Germany.