Sarkozy: No peace deal without halt to Israel settlement

Sarkozy said in the speech that peace with the Palestinians was possible if Israel stopped all settlement activity and accepted Jerusalem as capital of two states. 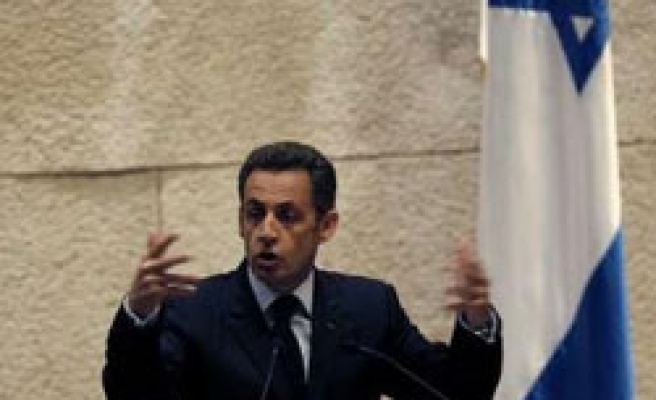 French President Nicolas Sarkozy positioned himself on Monday as a possible Middle East peace broker, offering in a speech to Israel's parliament to help reach agreement and mobilize French troops if necessary.

"I ask you to trust us because we want to help you," said Sarkozy, the first French president to address the Knesset since Francois Mitterrand in 1982.

"France is ready to provide its guarantee, ready to mobilize its diplomatic service, its resources, its soldiers. You can trust France," he said, without specifying what role French soldiers could play.

Since taking office a year ago, Sarkozy has broken rank with his predecessors by repeatedly branding himself a "friend of Israel".

Sarkozy said in the speech that peace with the Palestinians was possible if Israel stopped all settlement activity and accepted Jerusalem as capital of two states.

"Create the conditions for movement," Sarkozy told lawmakers, urging them to back a proposal for settlers to leave the West Bank for compensation and rehousing in Israel.

"There can be no peace without a halt to settlement activity," he said, while also telling Israel it was not alone in the face of what he said was a military Iranian nuclear program.

Israel has said it would press ahead with construction in settlement blocs.

In a welcoming address, Olmert praised Sarkozy's role in bolstering Franco-Israeli ties but, in an apparent allusion to the dispute over settlement expansion, added: "Not always do we see eye to eye on every detail."

During his three-day state visit to Israel, which began on Sunday, Sarkozy has said an Israeli-Palestinian deal could be reached soon, striking a far more optimistic note than most observers, who highlight Olmert's weakness at home and divisions among the Palestinians.

Amid deep public skepticism, the United States, the main broker in talks between Olmert and Palestinian President Mahmoud Abbas, hopes that a framework statehood deal can be achieved before U.S. President George W. Bush leaves office in January.

An official close to Sarkozy told reporters that preoccupation with the presidential election campaign in the United States had created "a sort of an opening for anyone who wants to head into it" in efforts to move negotiations along.

"The president's visit could give an indication of who could, in the coming months, say 'why not create a bigger role for the European Union under France's presidency?'," the official added, referring to the rotating six-month EU presidency which France takes over on July 1.

Israel has also opened indirect peace talks with Syria, but officials say not enough progress has been made for Olmert and Syrian President Bashar al-Assad to meet at the launch summit of Sarkozy's Mediterranean Union project in Paris next month.