Sarkozy met his Egyptian counterpart Mubarak on Saturday, kicking off a round of diplomacy with Middle East leaders ahead of an EU-Mediterranean summit on Sunday. 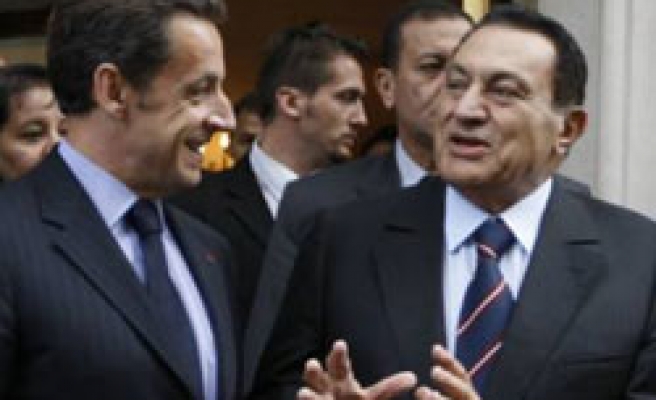 French President Nicolas Sarkozy met his Egyptian counterpart Hosni Mubarak on Saturday, kicking off a round of diplomacy with Middle East leaders ahead of an EU-Mediterranean summit on Sunday.

Syrian President Bashar al-Assad will mark his return to the European stage later in the day when he holds talks with both Sarkozy and Lebanon's new president, Michel Suleiman, a day after a new Lebanese government finally took office.

Sarkozy strolled to his meeting with Mubarak in a central Paris hotel but was due to greet Assad and Suleiman with full pomp and ceremony at the Elysee Palace in the afternoon.

The three men were due to make a joint declaration at 6.40 p.m. (1640 GMT) along with the emir of Qatar, Sheikh Hamad bin Khalifa al-Thani, who helped broker a power-sharing deal among Lebanon's feuding pro-Western and pro-Syrian factions in May.

Following the deal that pulled Lebanon back from the brink of a new civil war, France decided to resume high level contacts with Syria and Sarkozy invited Assad to the EU-Mediterranean summit.

The high-profile gathering will give Assad the chance to hold his first meeting with Suleiman and, in a diplomatic first, take part in the Mediterranean Union summit alongside Israeli Prime Minister Ehud Olmert, who flies into Paris on Sunday.

"This is an historic visit for me, an opening towards France and towards Europe," Assad said in an interview with Le Figaro newspaper this week. However, he said it would be premature to hold direct talks with Israel, apparently ruling out a face-to-face meeting with Olmert.

Sunday's summit will draw more than 40 heads of state and government to Paris.