Sarkozy under fire on handling of army, TV

Analysts said Sarkozy's uncompromising brand of confrontational politics might hurt his standing after a bruising first year in office, when his ratings slumped on the back of unhappiness over his celebrity lifestyle. 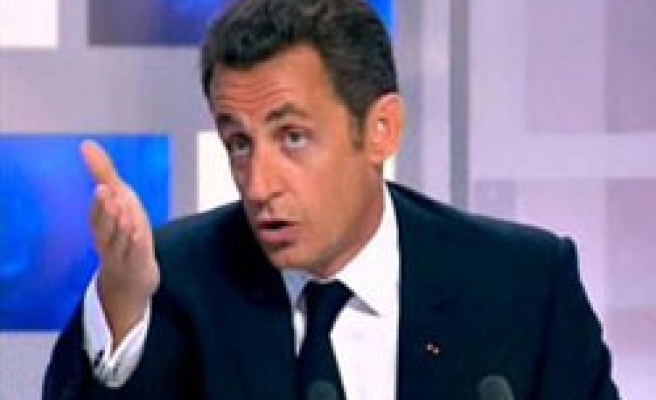 The controversies are unrelated but come at a delicate time for Sarkozy, who wants to clear his domestic agenda to concentrate on France's six-month presidency of the European Union which began on Tuesday.

In an unusual outburst, the head of state television said on Wednesday criticism by Sarkozy of TV programming was "stupid" and hinted he might resign over the president's push to remove advertising from the public airways.

France's army chief of staff, General Bruno Cuche, did resign on Tuesday. He took full responsibility for an incident at the weekend when a soldier fired shots at a military show, wounding 17 people, in an apparent serious lapse of procedure.

The French media said that behind the general's abrupt departure lay deep-rooted unhappiness in military ranks over Sarkozy's handling of the armed forces.

There was particular concern over the way the president had upbraided senior officers following the shooting incident. "You are a bunch of amateurs, not professionals," he was widely quoted as saying, demanding that heads roll.

Sarkozy unveiled a wide-ranging reform of the military on June 17, including plans to cut 54,000 mostly non-combat posts, which has alarmed many soldiers.

"There is genuine ill-feeling between the military and the commander-in-chief," said Christophe Barbier, editor of l'Express magazine.

"He is a restless and nervous man ... who likes to see rapid sanctions imposed," he added. "It is not a good way of managing human relations ... it is not very presidential and he will have to change or else he will have more setbacks of this type."

Ministers and officials rushed to defend Sarkozy over his handling of both the army and television, showing how sensitive the government is to criticism in these high-profile areas.

"It is not normal to say certain things, such as 'stupid'. It really isn't possible," Culture Minister Christine Albanel said, referring to the outburst by TV head Patrick de Carolis.

Defence Minister Herve Morin also rallied to Sarkozy's side, saying any criticisms the president might have made after the shooting incident were not aimed at the military as a whole.

But analysts said Sarkozy's uncompromising brand of confrontational politics might hurt his standing after a bruising first year in office, when his ratings slumped on the back of unhappiness over his celebrity lifestyle.

"One has the impression that after 'president bling-bling' we now have 'president biff-baff'. In other words he is letting the slaps fly," political commentator Pierre-Luc Seguillon told LCI television.

"This is a president ... who generates a lot of hostility."