A vast ocean of water and ammonia may lurk deep beneath the surface of Titan, the intriguing, orange moon of Saturn already known for its blanket of clouds and dense atmosphere, scientists said on Thursday. 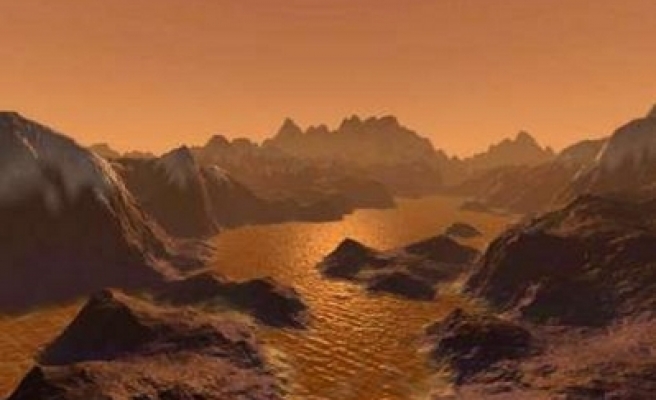 Astronomers have not directly observed this ocean. But they said observations made by the Cassini spacecraft of Titan's rotation and shifts in the location of surface features suggest an ocean exists perhaps 60 miles (100 km) under the surface.

Titan is Saturn's largest moon and the second biggest in the solar system, only slightly smaller than Jupiter's moon Ganymede. Titan's diameter of about 3,200 miles (5,150 km) is larger than the planet Mercury and the dwarf planet Pluto.

Cassini, exploring Saturn and its moons in an ongoing U.S.-European mission, collected measurements using radar that penetrated Titan's thick clouds during 19 passes over the moon from October 2005 to May 2007.

Data from the early observations allowed researchers to establish the locations of 50 landmarks including lakes, canyons and mountains on Titan's surface. They looked at later radar data and discovered that prominent surface features had shifted location by up to 19 miles (30 km).

The spin of Titan's crust is linked to winds blowing through its atmosphere, the scientists said. But the type of broad displacement of surface features seen on Titan would be hard to explain unless its crust were separated from its core by an internal ocean, allowing the crust essentially to float.

"It's because Titan's crust seems to be so mobile that we infer this internal ocean," Ralph Lorenz of the Johns Hopkins University Applied Physics Laboratory in Laurel, Maryland, who directed the research published in the journal Science, said in a telephone interview.

Lorenz said this ocean was probably mostly water with "a few percent" ammonia.

Its atmosphere is mostly made up of nitrogen, with other hydrocarbon elements that give Titan its orange color.

Titan's atmosphere consists of compounds that may have existed in the Earth's primordial atmosphere, but Titan may have more of certain chemicals like methane and ethane.

"It's very much colder than the Earth. But the same processes that go on in our own weather, particularly the formation of clouds and rain, happen on Titan -- but with liquid methane not with water," Lorenz added.

Titan is thought to have hundreds of times more liquid hydrocarbons than all the known oil and natural gas reserves on Earth, with hydrocarbons raining from the sky and collecting in vast deposits that form lakes and dunes.

Scientists have found evidence suggesting underground oceans on other moons in the solar system including Jupiter's Europa, Callisto and Ganymede and Saturn's Enceladus.