The League of Palestinian Scholars has stepped in to find a peaceful solution to the crisis of the bombed-out Nahr Al-Bared refugee camp. 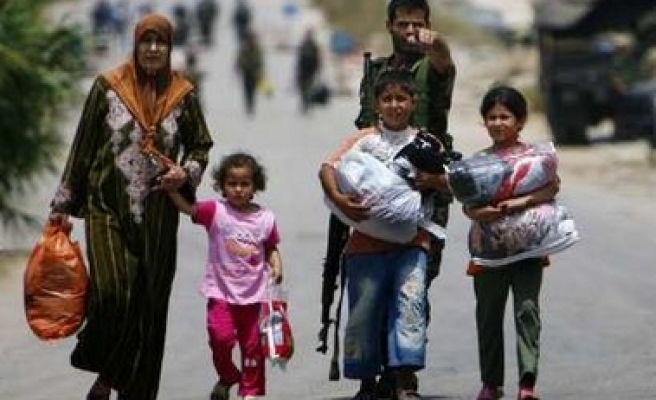 The League of Palestinian Scholars has stepped in to find a peaceful solution to the crisis of the bombed-out Nahr Al-Bared refugee camp which the Lebanese army has been besieging for the eighth running day in its confrontation with the militant Fatah Al-Islam group.

"We are trying our best to reach positive results," Sheikh Mohammad el-Hajj, the League's representative in northern Lebanon, told IslamOnline.net on Monday, May 28.

A three-man delegation of the League, including Hajj, visited the coastal camp on Sunday, May 27.

"The visit took place in coordination with the parties concerned," he said, but would not clarify whether they had met Fatah Al-Islam leader Shakir el-Absi.

"The talks centered on avoiding the circumstances that led to the current explosive situation."

A new firefight broke out Monday at the besieged Palestinian refugee camp.

The rattle of gunfire reverberated around the camp before Lebanese soldiers fired four shells toward the northern entrance where the militiamen are believed to be holding up.

At least 78 people, including 33 soldiers, 27 militants and 18 civilians, have been killed in deadly clashed between the army and the shadow group since Sunday May 20.

The group has a few hundred fighters of various Arab nationalities and is said to be inspired by Al-Qaeda.

El-Hajj declined to elaborate whether the delegation carried a certain offer to Fatah Al-Islam or any conditions by the militant group to end the crisis.

"It is negotiations at the end of the day and we just convey the viewpoints of each party to the other," he said, adding that Fatah Al-Islam welcomed their good offices.

"This is not the first time we talk to Fatah Al-Islam," El-Hajj said. "We met its leaders before this conflict to get acquainted with its activities."

The Palestinian scholar declined to elaborate further on the talks, but noted that they were planning a second visit to the camp Monday.

"We, however, are against a military solution to the current crisis, and rather opt for a political one."

The Lebanese government has demanded the handing over of Fatah al-Islam militants, accusing them of sparking the conflict by attacking army positions around Nahr al-Bared and the northern city of Tripoli.

Druze leader Walid Jumblatt, an influential member of Lebanon's governing coalition, said Sunday there was no plan for decisive military action to end the standoff.

El-Hajj said the situation inside the Palestinian refugee camp is more than disastrous.

"After one week of clashes, the residents suffer a serious shortage of water, food, medicine as well as continuing power outages."

The Palestinian scholar said the coastal camp is also facing a total environmental disaster because of the widespread destruction and fires.

"The health conditions are very deplorable.

"What added insult to injury is false rumors that the Lebanese army would use chemical weapons flown in from the US," he said.

On the League's humanitarian role, El-Hajj said it sent aid convoys and medical equipment to the camp.

"We are also counseling the refugees and leading them in congregational prayers like last Friday, which drew some 7,000 people."

According to UN estimates, between 3,000 and 8,000 of the 31,000 Palestinian refugees registered at Nahr al-Bared are still inside the camp.

In the past days the numbers of those getting out has dropped, due to sniper fire in the streets.

Some residents refused to leave the squalid camp. For them, becoming refugees yet again is not an option.