Pioneering science fiction writer and visionary Arthur C. Clarke, best known for his work on the movie '2001: A Space Odyssey', has died in his adopted home of Sri Lanka at the age of 90. 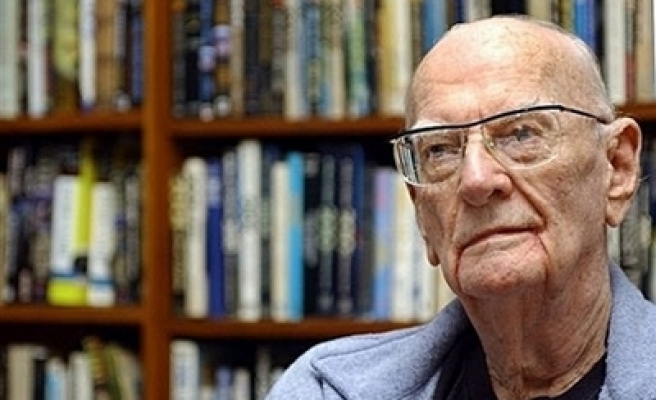 He died of respiratory complications and heart failure doctors linked to the post-polio syndrome that had kept him wheelchair-bound for years.

Marking his '90th orbit of the sun' in December, the prolific British-born author and theorist made three birthday wishes: For E.T. to call, for man to kick his oil habit and for peace in Sri Lanka.

Clarke was born in England on Dec. 16, 1917, and served as a radar specialist in the Royal Air Force during World War Two.

He was one of the first to suggest the use of satellites orbiting the earth for communications, and in the 1940s forecast that man would reach the moon by the year 2000 -- an idea experts at first dismissed as rubbish.

When Neil Armstrong landed in 1969, the United States said Clarke 'provided the essential intellectual drive that led us to the moon'.

Clarke wrote around 100 books and hundreds of short stories and articles, and wanted to be remembered foremost as a writer.

Trained as a scientist, he was renowned for basing his work on scientific fact and theory rather than pure fiction and for keeping humanity at the heart of his technological visions.

In 1964, he started to work with the film maker Stanley Kubrick on the script of a groundbreaking film which was to win audiences and accolades far wider than those of most previous science fiction-'2001: A Space Odyssey'.