Scientists examine cause of bee die-off

After months of study, researchers cannot tie the ailment to any single factor. But scientists are focused on a new, unnamed pathogen found in dead bees, and on the role of pesticides. 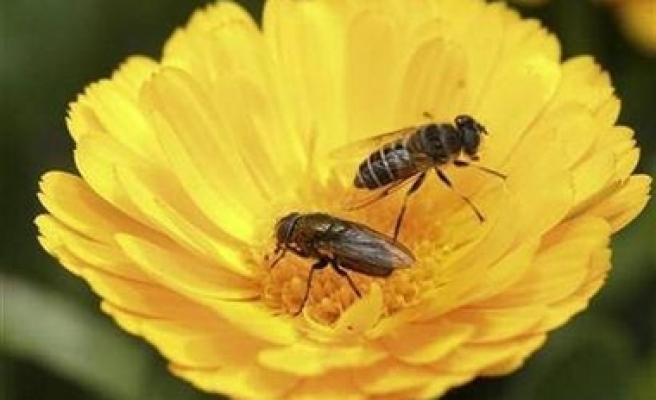 Scientists investigating a mysterious ailment that has killed many of the nation's honeybees are concentrating on pesticides and microorganisms as possible causes of the disorder, and some beekeepers are refusing to place their hives near chemically treated fields.

Scientists from Penn State University and the U.S. Department of Agriculture are leading the research into the disease, which has killed tens of thousands of bee colonies in at least 35 states.

The die-off has threatened the livelihood of commercial beekeepers and strained fruit growers and other farmers who rely on bees to pollinate more than 90 flowering crops, including apples, nuts and citrus trees.

After months of study, researchers cannot tie the ailment to any single factor. But scientists are focused on a new, unnamed pathogen found in dead bees, and on the role of pesticides, said Maryann Frazier, a senior extension associate in the university's entomology department.

David Hackenberg was the first beekeeper to report the disorder to Penn State last fall after losing nearly 75 percent of his 3,200 colonies.

He has rebuilt his business to 2,400 colonies but now asks growers whether they use the chemicals because he is convinced the bees are being harmed by pesticides, especially a type called neonicotinoids.

If bees continue to die, he said, Hackenberg Apiaries may have to raise prices to replace dead hives. The business charges about $90 a hive to "lease" bees in fields. Replacing a hive with new bees costs $120.

Neonicotinoids do not contain nicotine — the addictive drug found in tobacco — but they are named after it because they target nerve cells in a similar way.

Bayer Crop Science is one of the nation's top producers of neonicotinoid pesticides, which have been on the market since 1994. But company spokesman John Boyne said neonicotinoids are not the cause of the honeybees' demise.

"We have done a significant amount of research on our products, and we are comfortable this it is not the cause," Boyne said. He said "a number of nonchemical causes may be to blame."

Beekeeper Jim Aucker, of Millville, was left with just 240 of his 1,200 hives earlier this spring after the illness struck. He's back up to nearly 600 hives now and is convinced pesticides are playing a role after finding chemicals that had been sprayed on crops in the dead hives.

"Whether it's 100 percent the cause, I'm not sure, but I'm positive it's not helping," Aucker said. He doesn't plan to return to fields where he thinks there might be a pesticide problem.

Daniel Weaver, president of the American Beekeeping Federation, said he is not surprised some beekeepers are avoiding fields with pesticides.

"I try to limit my association to growers that I know will be responsible" he said, referring to farmers who avoid applying pesticide while the bees are flying. "Of course, I can't escape it completely."

But he also cautioned that the bees' immune systems may have been weakened for reasons unrelated to pathogens or pesticides, such as mites.

Reports from other beekeepers varied in mid-June — a time when bee colonies are supposed to be thriving. Some beekeepers said they are losing bees, while others are holding steady or growing colonies again.

Hackenberg said he even tried to disinfect many of his hives by sending them through a giant radiation machine in Mulberry, Fla., run by a private firm that typically treats pharmaceuticals and food products.

But he fears what might happen if his bees fall ill again. As he worked with a thriving hive on a hill above his house, his cell phone rang with a caller asking about lining up bees for 2008.

"Yeah, we sell bees," he said, "if we're still in business next year."