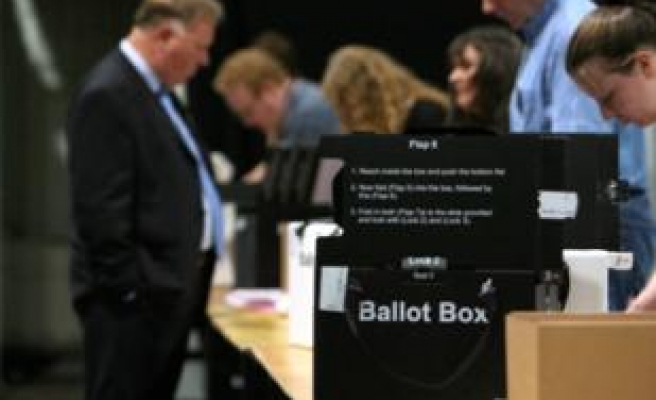 The Scottish National Party (SNP) won 47 seats in the 129 seat parliament, to Labour's 46, in Thursday's parliamentary and municipal council elections.

Final results issued on Friday showed the Conservatives came third with 17 seats, followed by the Liberal Democrats with 16. The Green party won two seats and an independent canidate also won a seat.

"The SNP are now the largest party in the Scottish Parliament but by the narrowest of margins," Jack McConnell, Labour's First Minister in the parliament, said.

"We recognise their position but we also recognise our responsibilities to the people of Scotland."

Labour and the SNP ran neck-and-neck throughout the day's vote, which was marred by problems with new ballot papers and electronic counting machines, as well as postal voting delays.

No party has an overall majority, so coalition talks between the parties appear set to take place in the coming days.

Alex Salmond, SNP leader, announced his candidacy for the First Minister's post in the wake of the final result.

He said the results showed Labour no longer had a "divine right" to rule Scotland and had "lost its moral authority" to govern.

"If the SNP is given the chance to lead, we shall do so in the national interest and not for political advantage," he said before the result was announced.

The SNP has traditionally called for Scotland to be allowed to hold a referendum on whether it should seek independence from the United Kingdom.

The independent electoral commission announced an immediate review into the problems at the ballot.

Analysts estimated 100,000 papers may have been discounted from the vote because they had not been filled in correctly.

In some parliamentary constituencies, the number of spoilt papers exceeded the majority of the winning candidate, a situation described as a "debacle" by Salmond.

The SNP made key gains over Labour in a number of Labour strongholds, including Dundee West and Central Fife, which are both in the backyard of Gordon Brown, Britain's finance minister.

Brown is strongly tipped to become Britain's next prime minister in the event of Blair standing down from the post.