Search on for missing as Japan quake deaths rise to nine

The 7.2 magnitude quake struck on Saturday morning in the prefectures of Miyagi and Iwate, a sparsely populated, scenic region around 300 km (190 miles) north of Tokyo, where buildings also shook. 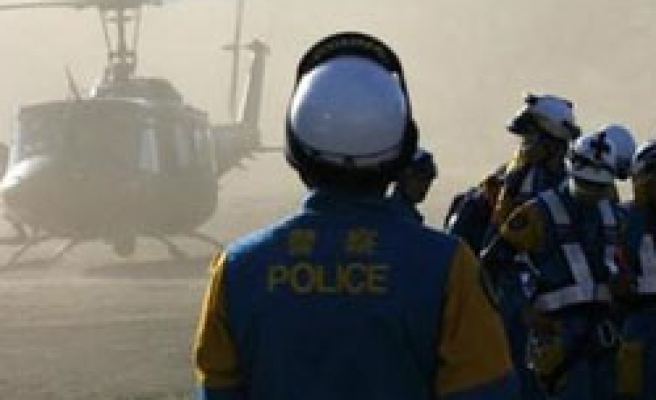 More than 1,000 rescue workers including troops searched on Sunday for 13 people missing after a powerful earthquake rocked northern Japan, killing at least nine and injuring over 200.

The 7.2 magnitude quake struck on Saturday morning in the prefectures of Miyagi and Iwate, a sparsely populated, scenic region around 300 km (190 miles) north of Tokyo, where buildings also shook.

Mountains were carved away by the force of the quake, trees crashed into newly slashed ravines, roads were cut off by landslides, and bridges buckled and broke.

More than 260 aftershocks had jolted the area by Sunday morning, and officials warned there could be strong quakes to come.

Rescue workers picked their way through debris while scores of others, including soldiers, began carefully crossing a river of mud covered with makeshift wooden boards to get to the two-story inn, whose first floor had completely collapsed, footage from NHK public TV showed.

Several hours later, the rescuers recovered three bodies from the crushed inn, a local government official said, adding that the search would continue for those unaccounted for.

"In this case, it's a very mountainous area and if the roads are cut, even if you call out the troops, you can't get in," said Masaaki Sakakibara, a military official in charge of coordinating rescue operations in Kurihara near the epicenter.

"We are very lucky this time because the weather is good, so we can use helicopters. The roads here are very narrow and this limits access."

Homes were littered with scattered and smashed belongings.

"I don't know where we'll go, or what we will do now," said 80-year-old Naoshi Miura, who with his wife Kirino, 76, and their two dogs was airlifted by helicopter from their mountain home.

Nine people had been confirmed dead, and NHK said 234 were injured.

About 300 people spent the night in evacuation centers and some 340 households were without electricity, officials in Miyagi and Iwate prefecture said. More than 2,800 homes were without water as of Saturday evening, the officials said.

"There's no water and cooking is hard, so we are living on instant food," said 73-year-old Tokue Takahashi, who came to an evacuation centre to get water.

Some 100 people were cut off in remote areas after roads were blocked by landslides, the officials said.

"I couldn't really sleep at all, just a couple of hours. It's so close to where the helicopters take off and every time they landed, the windows shook," said 83-year-old Kaoko Mitsugahara, at an evacuation centre near a school where rescue helicopters were taking off and landing in a steady stream.

Many others, however, had returned home after spending the night in the make-shift evacuation centers.

As is often the case when natural disasters strike rural Japan, many of those affected were elderly, some living alone.

"If people live alone, it's a worry for their health," said Minoru Suzuki, a 77-year-old volunteer medical worker.

"Stress is a big problem."

Medical experts say steps must be made to prevent affected people from suffering from mental problems.

"You have to avoid what happened in other places after the earthquakes like Kobe and Niigata -- the people who end up dying isolated in temporary housing," said Rimi Fuse, a psychiatrist who specializes in treating disaster victims.

Experts said the scope of the quake was far smaller than the one that hit China a month ago and the region's sparse population and Japan's stricter building codes had also limited the damage.

In October 2004, a magnitude 6.8 earthquake struck the Niigata region in northern Japan, killing 65 people and injuring more than 3,000. That was the deadliest quake since a magnitude 7.3 tremor hit the city of Kobe in 1995, killing more than 6,400.