Flag-waving Turks demonstrated in this Black Sea port city on Sunday against the government on Sunday, Baykal and Democratic Left leader Zeki Sezer attended the Samsun demonstration together in a show of unity. 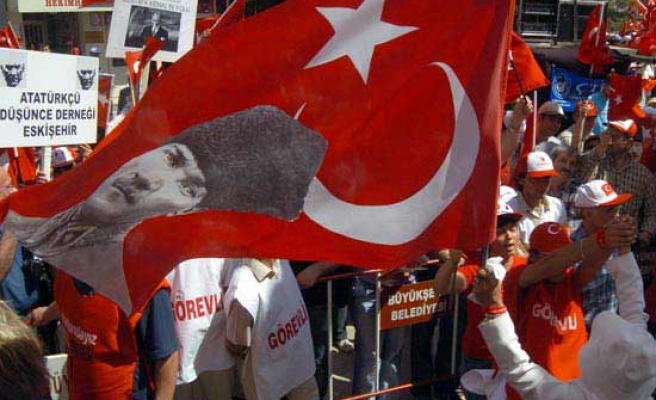 Flag-waving Turks demonstrated in this Black Sea port city on Sunday against the government on Sunday, Baykal and Democratic Left leader Zeki Sezer attended the Samsun demonstration together in a show of unity.

The demonstration in Samsun — the latest in a series of protests nationwide — was significant, as the city was where Turkey's secular founder, Mustafa Kemal Ataturk, launched the country's war of independence against occupying powers after World War I.

On Sunday, crowds gathered in Samsun's central square and chanted "Turkey is secular and will remain secular!" Protesters carried Turkish flags and posters of Ataturk.

Organizers said participation would likely be lower than at previous demonstrations.

The main opposition Republican People's Party, led by Deniz Baykal agreed on alliance terms with the Democratic Left Party this week, following pleas for them to unite at the previous demonstrations.

On Sunday, Baykal and Democratic Left leader Zeki Sezer attended the Samsun demonstration together in a show of unity.

"We are here to cry out loud that we are against Shariat (Islamic law)," protest organizer Turkan Saylan said.

Secular opposition parties then boycotted the presidential voting process in Parliament, creating a political deadlock and forcing Gul to abandon his bid.

The decision, along with increasing pressure from the public and the military, led Erdogan to call for early parliamentary elections, which are scheduled for July 22.

Parliament also passed an amendment to allow the president to be elected directly by the people, rather than by Parliament, which is dominated by members of Erdogan's party. President Ahmet Necdet Sezer has yet to endorse the amendment.

Parties from Turkey's fractured secular opposition have been scrambling to unite to challenge Erdogan's party at the polls. Earlier this month, two parties with only a small number of legislators in Parliament — the True Path and Motherland parties — united as the Democrat Party.

Erdogan rejects the label "Islamist," however, and says he is committed to Turkey's secular traditions. His government has done more than most previous governments to advance Turkey's European Union membership bid.