Hundreds of burly former militiamen from the Balkan wars regrouped outside a church in central Serbia and threatens to fight against Kosovo. 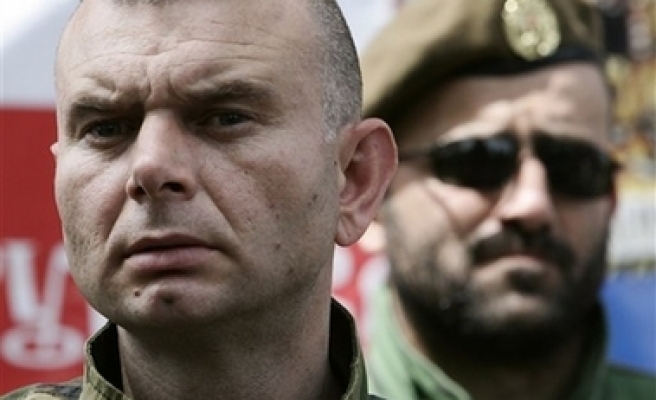 Hundreds of burly former militiamen from the Balkan wars regrouped outside a church in central Serbia on Saturday, promising to fight together as a paramilitary unit once more if Kosovo breaks away from the government in Belgrade.

Twenty-seven people were detained, all wearing T-shirts with symbols of the disbanded Unit for Special Operations, whose former commander and several members are on trial for the 2003 assassination of Serbia's Prime Minister Zoran Djindjic.

"We will never give up Kosovo, we are ready to fight," said one of the organizers, Andrej Milic.

Milic added their unit will be available to the government if Serbia goes to war, and called for a "new Serb uprising and a new battle for Kosovo."

The event illustrated the mounting nationalism here over the Western-backed plan to allow Kosovo to split from Serbia as demanded by its ethnic Albanian majority.

Many of those in Krusevac on Saturday wore military uniforms with nationalist symbols typical of the notorious units accused of atrocities during the wars in Croatia, Bosnia and Kosovo in the 1990s. Some wore T-shirts with images of the U.N. war crimes fugitive Ratko Mladic.

Kosovo is formally part of Serbia, but is dominated by ethnic Albanians who are seeking independence. The region has been run by the United Nations since a 1998-99 Serb-Albanian war.

No reaction from government

There was no immediate reaction from the Serbian government to the veterans' gathering in Krusevac, although creation of paramilitary units in Serbia is illegal.

The units were first founded in the early 1990s, during the rule of the late Milosevic, who took Serbia to four wars during his decade-long rule.

Dragoljub Vasiljevic, one of the volunteers who came to Krusevac on Saturday denied the brutality allegations, telling the Beta news agency that they were "honorable and brave" fighters.
Last Mod: 06 Mayıs 2007, 13:27
Add Comment