Serbia's parliament has confirmed the government led by Vojislav Kostunica, the prime minister, responding to calls by the European Union for the country to commit to a reformist path before resuming talks on closer ties. 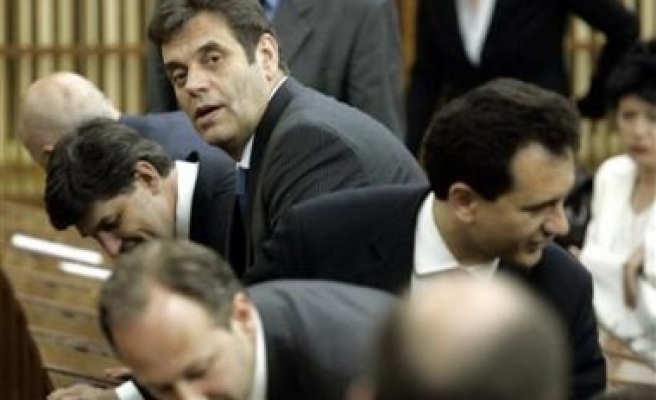 Serbia's parliament has confirmed the government led by Vojislav Kostunica, the prime minister, responding to calls by the European Union for the country to commit to a reformist path before resuming talks on closer ties.

A midnight deadline was almost missed after hardline deputies protested against a late-night police search for war crimes fugitive Ratko Mladic, who they see as a hero, and dragged the debate out to half an hour before time.

Olli Rehn, the EU enlargement commissioner, was due in Belgrade on Wednesday to meet Serbian leaders and assess whether Serbia is serious about arresting leading war crimes suspects such as Mladic.

Kostunica, a moderate nationalist, formed a coalition with pro-Western president Boris Tadic on Friday to the relief of the West, which feared the fragile democracy would relapse into nationalism.

"Serbia's aspiration to become a full member of the EU is a clearly declared commitment of every party in this coalition," Kostunica told parliament earlier, noting, however, that Serbia would not make concessions on Kosovo for the sake of EU ties.

The EU had been urging the formation of a moderate coalition since Serbia's inconclusive elections in January, but toughened its stance last week when Tomislav Nikolic, a hardline nationalist, was elected parliament speaker.

Brussels put pressure on Kostunica and Tadic to form a coalition, and replace Nikolic.

The result was a delicate balance: Kostunica is prime minister but Tadic's Democratic party gets 13 of 25 cabinet posts.

The Democrats and Kostunica's Democratic Party of Serbia will have joint control of the security services, something Tadic and the EU insisted on because Kostunica failed to arrest Mladic during his previous tenure.

Last year the EU froze talks on a Stabilisation and Association Agreement (SAA), the first step towards membership, over Mladic, who it says is being aided by hardliners in the Serbian army and police.

Rehn said on Monday that the EU was "rather confident" the programme of the new government would warrant an immediate resumption of SAA talks, but noted Belgrade would have to send Mladic to The Hague before the SAA could be signed. Last Mod: 16 Mayıs 2007, 09:56
Add Comment