Analysts say Sharif has his eye on the country's next election, which he hopes to win, and returning to parliament now would be a step towards that goal. 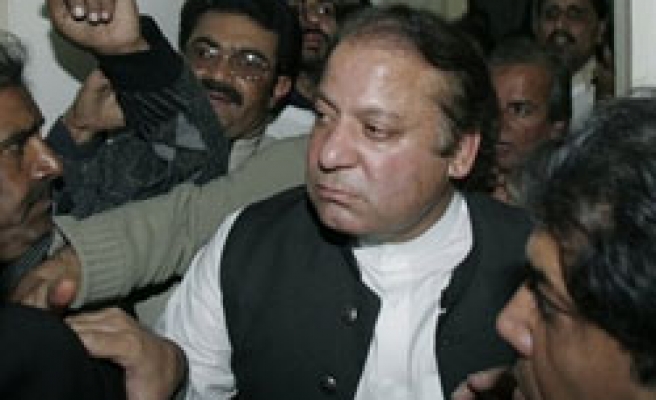 The party of former Pakistani minister Nawaz Sharif won the most seats in by-elections this week though voting for a seat Sharif was expected to win was postponed pending a court decision on his eligibility.

The results will not effect the outcome of a Feb. 18 general election in which slain former prime minister Benazir Bhutto's Pakistan People's Party (PPP) won 123 seats in the 342-seat National Assembly and Sharif's party came second with 91.

Sharif, the prime minister then army chief Musharraf ousted in a 1999 coup, returned home from exile in November but was barred from running in the February election because of an old criminal conviction he says was politically motivated.

His party has joined a coalition led by Bhutto's PPP but the alliance has been strained by differences over the fate of judges Musharraf dismissed last year and over how to handle the unpopular president.

The two-time prime minister, dogged by accusations of corruption during his rule, has won much public support for his uncompromising stand against Musharraf and for his insistence the judges be reinstated.

Analysts say Sharif has his eye on the country's next election, which he hopes to win, and returning to parliament now would be a step towards that goal.

He had been expected to win a National Assembly seat in the eastern city of Lahore this week but a court ruled on Monday he was ineligible, mainly on the basis of the old conviction.

The government lodged an appeal in the Supreme Court on Wednesday against the ruling and it postponed the vote in the constituency.

The Supreme Court is due to hold its next hearing into the case on Monday.