Deep-sea explorers said Friday they have hauled up what could be the richest sunken treasure ever discovered: hundreds of thousands of colonial-era silver and gold coins worth an estimated $500 million from a shipwreck in the Atlantic Ocean. 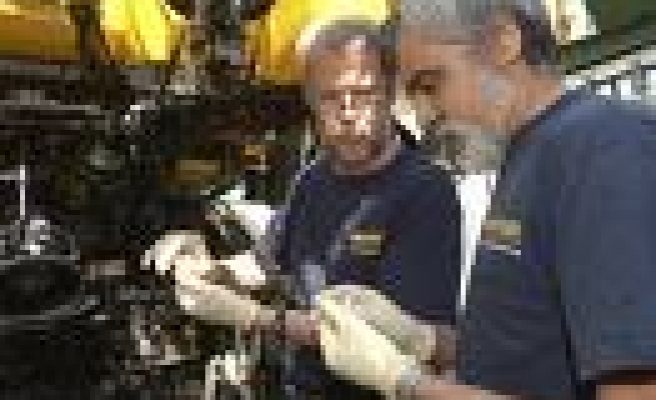 A chartered cargo jet recently landed in the United States to unload hundreds of plastic containers packed with the 500,000 coins, which are expected to fetch an average of $1,000 each from collectors and investors.

"For this colonial era, I think (the find) is unprecedented," said rare coin expert Nick Bruyer, who was contracted by Tampa-based Odyssey Marine Exploration to examine a batch of coins from the wreck. "I don't know of anything equal or comparable to it."

Citing security concerns, the company declined to release any details about the ship or the wreck site.

Company co-founder Greg Stemm said a formal announcement will come later, but court records indicate the coins might have come from the wreck of a 17th century merchant ship found off southwestern England.

Because the shipwreck was found in an area where many colonial-era vessels went down, the company is still uncertain about its nationality, size and age, Stemm said, although evidence points to a specific known shipwreck.

The site is beyond the territorial waters or legal jurisdiction of any country, he said.

"Rather than a shout of glee, it's more being able to exhale for the first time in a long time," Stemm said of the haul, by far the biggest in Odyssey's 13-year history.

He would not say if the loot was taken from the same wreck site near the English Channel that Odyssey recently petitioned a federal court for permission to salvage.

In seeking exclusive rights to that site, an Odyssey attorney told a federal judge last fall that the company likely had found the remains of a 17th-century merchant vessel that sank with valuable cargo aboard, about 40 miles off the southwestern tip of England. A judge granted those rights Wednesday.

In keeping with the secretive nature of the project dubbed "Black Swan," Odyssey also is not discussing details of the coins, such as their type, denomination or country of origin.

Bruyer said he observed a wide variety of coins that probably were never circulated. He said the currency was in much better condition than artifacts yielded by most shipwrecks of a similar age.

The coins — mostly silver pieces — could fetch several hundred to several thousand dollars each, with some possibly commanding much more, he said.

Value is determined by rarity, condition and the story behind them.

Other experts said the condition and value of the coins could vary so much that the price estimate was little more than an educated guess.

"It's absolutely impossible to accurately determine the value without knowing the contents and the condition of the retrieved coins. It's like trying to appraise a house or a car over the phone," said Donn Pearlman, a rare coin expert and spokesman for the Professional Numismatists Guild.

Experts said that controlled release of the coins into the market along with aggressive marketing should keep prices at a premium.

The richest-ever shipwreck haul was yielded by the Spanish galleon Nuestra Senora de Atocha, which sank in a hurricane off the Florida Keys in 1622. Treasure-hunting pioneer Mel Fisher found it in 1985, retrieving a reported $400 million in coins and other loot.

Odyssey likely will return to the same spot for more coins and artifacts.

"We have treated this site with kid gloves and the archaeological work done by our team out there is unsurpassed," Odyssey CEO John Morris said. "We are thoroughly documenting and recording the site, which we believe will have immense historical significance."

The company salvaged more than 50,000 coins and other artifacts from the wreck of the SS Republic off Savannah, Ga., in 2003, making millions. But Odyssey posted losses in 2005 and 2006 while using its state-of-the-art ships and deep-water robotic equipment to hunt for the next mother lode.

"The outside world now understands that what we do is a real business and is repeatable and not just a lucky one-shot deal," Stemm said.

In January, Odyssey won permission from the Spanish government to resume a suspended search for the wreck of the HMS Sussex, which was leading a British fleet into the Mediterranean Sea for a war against France in 1694 when it sank in a storm off Gibraltar.

Historians believe the 157-foot warship was carrying nine tons of gold coins to buy the loyalty of the Duke of Savoy, a potential ally in southeastern France. Odyssey believes those coins could also fetch more than $500 million.

But under the terms of an agreement, Odyssey will have to share any finds with the British government. The company will get 80 percent of the first $45 million and about 50 percent of the proceeds thereafter.

Odyssey also is seeking exclusive rights to what is believed to be an Italian-registered passenger vessel that sank during World War I in the Mediterranean Sea east of Sardinia, and to another discovered in the Mediterranean about 100 miles west of Gibraltar.
Last Mod: 19 Mayıs 2007, 11:45
Add Comment