Signs have been found of a Kenya-bound flight that crashed in Cameroon with 114 people on board, an aviation official says. 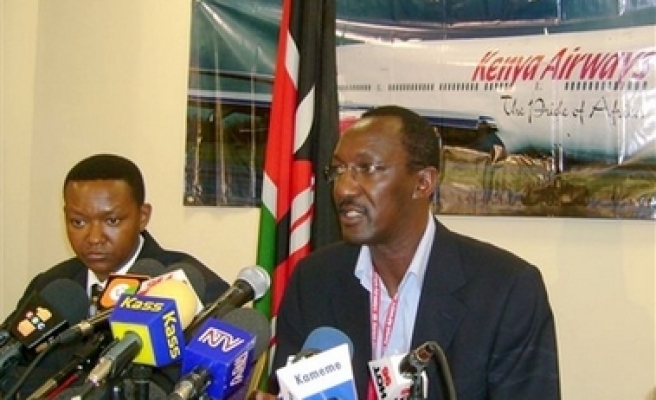 Signs have been found of a Kenya-bound flight that crashed in Cameroon with 114 people on board, an aviation official says.

Thomas Sobakam, chief of meteorology for the Doula airport from where the flight took off for Nairobi, refused to describe the signs on Sunday, but said they were not pieces of wreckage.

He said a state radio report saying that the crash site had been located was premature. He refused further comment, stressing the search for the aeroplane's body continued.

The Boeing 737-800 aircraft disappeared over the west African country on Saturday.

Michael Okwiri, a Kenya Airways spokesman, said officials in Kenya had also received reports the jet had been found, but could not confirm them.

Rescue teams have continued to comb the jungle area of southern Cameroon for the wreckage of Kenya Airways flight KQ 507, officials said.

"The crisis committee ... has decided to set up several teams made up of villagers to continue the search throughout the night," Placide Ndobo, a local government official in the southern region, told Reuters.

From midday on Saturday, the search focused on a region around the town of Lolodorf, 100km southwest of Yaounde, Cameroon's capital, where witnesses said they heard a loud explosion overnight, Cameroonian state radio reported.

Gabi Menezes, Al Jazeera's correspondent, said fog and dense forest were hampering the search operation on Sunday morning and that the Cameroon army might move its focus away from Lolodorf after searches had proved fruitless.

Radar-equipped helicopters, including one sent by the French military from a base in neighbouring Gabon, were looking at an area between three or four towns, a French diplomat in Cameroon said.

Mwai Kibaki, the Kenyan president, said he had sent a government team led by Chirau Ali Mwakwere, the Kenyan transport minister, to help the Cameroonian authorities find out what happened to the aeroplane.

"I wish to assure all that we have put in motion a mechanism to help establish the status of the Kenya Airways plane," Kibaki said in a statement.

Titus Naikuni, Kenya Airways Group's managing director, said on Saturday that the authorities in Cameroon had picked up an automatically generated distress signal from the area where the plane went missing.

He said Kenya Airways had not decided whether to ground the three other 737-800s in its fleet.

The flight set off from Cameroon's Douala airport amid torrential rain, bound for Nairobi, Kenya's capital, and had been due to land at 6.15am (03:15 GMT) on Saturday.

Kenya Airways said the Douala control tower had received a last message from the aircraft after takeoff.

The plane was said to be carrying 105 passengers and nine crew.

The majority of the aircraft's passengers were from African countries, including 34 Cameroonians. Other passengers included 15 Indians, five Britons and an American.