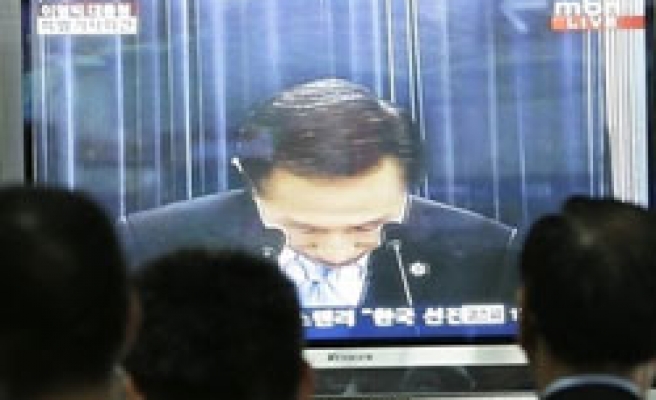 South Korea's embattled president apologised on Thursday for a U.S. beef import deal that sparked mass street protests and said he will sack close aides but analysts said that might not be enough to reverse a slide in public support.

Lee Myung-bak, who easily won December's election with pledges of pro-business reforms and growth for the world's 13th largest economy, now has an approval rating of less than 20 percent.

He said he wanted to start a new chapter for his four-month-old government.

"As I sat up on a hill in the dark watching the lines of candles filling the city streets, I faulted myself for not ensuring the comfort of the people," Lee said in a televised speech, referring to more than a month of candle-lit rallies.

"I will make it a top priority to stabilise prices and look after the lives of the working people," Lee said.

The April beef deal with the United States was meant to help a separate bilateral free-trade accord that U.S. congressional leaders threatened to block unless South Korea opened up its market to beef imports.

But widespread concern over mad-cow disease in U.S. beef quickly turned the issue into a lightning rod for a broad range of grievances against Lee's government that the public increasingly sees as out of touch with its concerns.

Apart from protests, thousands of truck drivers have been on strike, costing big exporting firms billions of dollars.

"No matter how urgent a national agenda it was, we should have paid attention to what the people wanted and how they will accept it. My government and I painfully regret this," Lee said.

Analysts said they expect large parts of Lee's reforms, which include privatising state firms, tax cuts for companies and mortgage relief for low-income households, to be stalled unless he can win back public support.

A parliament in which Lee's conservative Grand National Party holds the majority has yet to begin sitting because of a boycott by the left-of centre opposition angered at the beef deal.

Political commentator Yu Chang-seon said Lee's comments are "not entirely enough" to stop the street protests but will help quiet some of the criticism of his government.

Lee has also been faulted for raising expectations too high by making pledges to grow the economy by 6 percent this year, which seems well out reach because of soaring oil prices and a global slowdown. Labour unrest at home might also cause a drag.

Korea University political economy professor Hahm Sung Deuk said Lee needed to change the perception of a public that sees him as arrogant and out of touch with their concerns.

"He has to modify his leadership style and be more of a broker and less of a commander," Hahm said.

Hundreds of the 13,000 striking South Korean truckers, whose protest has paralysed ports, reached deals with employers and returned to work on Thursday, easing the pressure on Lee.

The truckers, who walked off work because of soaring fuel costs, reached tentative deals with firms including steelmakers POSCO and Hyundai Steel for higher pay, the transport ministry said.

The labour strikes have cost the country at least $6 billion in lost business as some companies stopped production lines after they ran out of storage space and ran low on parts and materials.

Shares of major exporters were lower on the Seoul stock market with analysts saying the damage from the strike was expected to have a prolonged effect on companies such as LG Electronics, shares in which fell about 5 percent on Thursday.

Top U.S. and South Korean trade envoys have been meeting in Washington trying to reach a voluntary deal that prevents beef products Koreans regards as posing a high risk of mad cow disease from being exported. South Korea was once the third-biggest importer of U.S. beef.

Lee said his country would not allow in U.S. beef without a guarantee from the U.S. government that exports would be restricted to products from younger cattle.

U.S. lawmakers have said they would not approve the bilateral free-trade deal unless Seoul completely opened its market to U.S. beef.