Soaring food prices in Turkey give officials food for thought

Turks are no exception when it comes to feeling the global pinch of soaring food prices: Rice alone has risen 130 percent in the last three months in Turkey 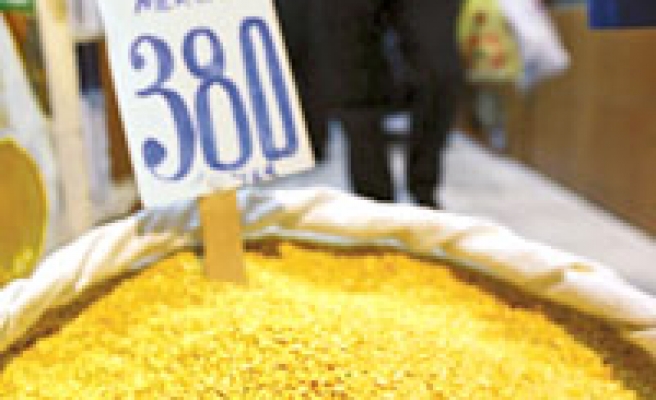 Consumer budgets were dealt yet another blow by soaring food prices on staples such as rice and wheat, while record-breaking oil prices have continued to push the prices of almost all other items up for the average household's budget.

And Turks are no exception when it comes to feeling the global pinch of soaring food prices: Rice alone has risen 130 percent in the last three months in Turkey, a figure that was only 68 percent worldwide last year.

Last week, dispatches recorded numerous riots in a dozen countries, signaling social unrest and instability. According to the World Bank, food prices have risen 83 percent in the past three years. The International Monetary Fund (IMF) was asked to provide a comprehensive relief package to alleviate the crisis, while the United Nations World Food Program is trying to collect on commitments but falling dramatically short of its target. The UN Food and Agriculture Organization says world cereal stocks this year will be the lowest since 1982.

Economists are trying to decipher what is really happening in the commodities market as officials scramble to address growing public tension over the high cost of food items. Greg Barrow, a senior public affairs officer at the World Food Programme (WFP), expressed this uncertainty in comments to Today's Zaman, saying it was "very difficult to predict precisely how high food prices are going to rise and how long they are going to stay at elevated levels." He also warned, "The effect on markets is already having an impact on the lives of the poorest, hungriest people, and the WFP faces an urgent need for increased donations to its budget in 2008 to meet a shortfall of half-a-billion US dollars, which has arisen as a result of the food price increases."

More than 73 million people in 78 countries depend on food aid, delivered mainly by the WFP. However in recent years the amount of aid has decreased due to increased food scarcity.

Rioting in response to rising food prices broke out recently in Egypt, Cameroon, the Ivory Coast, Senegal, Ethiopia and Haiti. According to the World Bank, 33 countries are at risk of social upheaval because of rising food prices. The armies of Pakistan and Thailand have been called to take measures to prevent looting and theft from fields and food warehouses. World Bank President Robert Zoellick called on governments to rapidly honor commitments to provide the WFP with the $500 million in emergency aid it needs by May 1. "It is critical that governments confirm their commitments as soon as possible and that others begin to commit," Zoellick said. He repeated his warnings on Sunday after a meeting of the bank's policy-setting committee and expressed frustration over slow progress. He said international finance meetings are "often about talk" and urged them "to put our money where our mouth is to help hungry people."

Turkish officials are trying to reassure the public that the government is taking all measures to protect consumers from the pinch of the global food crisis. Turkish Agriculture and Rural Affairs Minister Mehdi Eker said, "There is no need for alarm from the Turkish perspective," adding that "we have enough wheat and rice in stock to meet demand through the new harvesting season." The ministry is taking precautionary measures to control prices and prevent speculators from raising food prices artificially. Agricultural Products Office General Director İsmail Kemaloğlu signaled a change for the first time in their import policy, saying: "We will continue to import grain during the harvesting season."

The policy change met with a wave of criticism from producers in Turkey. Fearing that imported grain would drive prices lower to farmers' detriment, associations representing producers and farmers expressed their disapproval at the government's policies. Union of Turkish Agricultural Chambers President Şemsi Bayraktar said, "I'm concerned that importing during harvest season will harm our producers and disrupt the internal balance."

In the meantime, Turkish Minister of Foreign Trade Kürşad Tüzmen said yesterday that the government wanted "price increases balanced well with the market." Speaking to the Anatolia news agency he said that although there was "increasing demand for food worldwide, we don't see a radical change in food demand in Turkey." He also cautioned speculators about spreading undue fears and taking advantage of consumers, saying, "We won't let our people be milked by market speculators."

What change took place and led to the current increases in world food prices? There is no single answer to that question. Barrow explains: "These [reasons] include the relatively high price of oil, which adds to the cost of using agricultural machinery, the cost of transporting food, an increase in the cost of fertilizer production. There has also been a dramatic increase in demand from the growing economies of Asia -- mainly India and China -- where demand for grain has increased as wealth has increased and tastes have changed, with consumers eating more meat and dairy products. Adverse climatic conditions in some of the world's biggest grain producing countries, like Australia, have led to a drop in production levels. Finally, the shift in big producing countries like the United States toward biofuel production has added to the pressure on prices as fields that were once used to grow crops for human consumption are now growing food to generate biofuels."

The US government was a target of blame at IMF and World Bank meetings over the weekend. Many officials singled out aggressive US policies pushing corn-based ethanol and other biofuels as deepening the food crisis. On the other hand, the US is pointing a finger at China and other developing countries experiencing a strong demand for food. While admitting biofuel is a contributing factor, US officials are highlighting rising energy prices as a contributing factor to soaring food costs.

Asked about the root cause of the price hikes, Joachim von Braun, general director of the Washington-based International Food Policy Research Institute (IFPRI), explained to Today's Zaman: "The price of food and the value of natural resources such as land and water needed to produce have changed for the long run. The current high prices may be excessive, but we need to get used to high prices." According to Von Braun, "the main forces are high demand because of high economic growth -- and that is good -- high oil prices and third, bad policies, especially neglect of agricultural investment for many years and ill-designed, too-aggressive biofuels policies." He urges "a major initiative for agricultural productivity," saying: "Governments need to increase their public support of agriculture and give incentives to the private sector. The increased tendencies to ban exports and increase import subsidies hinders sharing [during] the scarcity around the world, and this needs coordinated international action."

Almost everyone agrees that the price hikes are likely to stay with us for a long time. Tim Lang, professor of food policy at City University in London's Centre for Food Policy, thinks the hikes are permanent. Responding to a question posed by Today's Zaman on what could be done to alleviate the food crisis, he said: "This is very difficult. There is a policy divide; some argue that we merely need to increase production using new high-tech methods such as genetic modification. Others including [myself] think we will have to develop new food systems based on ecological principles." Lang suggests "we will have to reduce meat consumption, be very careful not to allow biofuels to compete for food over land use, reduce food waste and be more equitable."

Rising food prices is causing another interesting development in the world economy -- a reverse wave of protectionism. Countries usually impose trade barriers to imports to protect local industry and boost exports. This time the opposite is happening. Recently, at least a dozen of 58 countries have reduced tariffs to food imports and erected barriers to exports in hopes of restraining food prices domestically and moving toward "self-sufficiency," according to the World Bank. India started to restrict grain exports while decreasing taxes on edible oils, corn and butter. Egypt followed suit and halted rice exports for six months as of April 1. Turkey is also cutting import taxes on wheat to 8 percent from 130 percent and to 0 percent from 100 percent on barley to reflect the policy change on the food market. Aside from short-term measures, government sources in Turkey are saying revitalized irrigation plans for the giant Southeastern Anatolia Project (GAP) are in the works.