Society reacts to PM's call for couples to have 3 kids

While PM Erdoğan's call for women to give birth to at least three children has received the support of some individuals and organizations, several others have said couples, not public officials, should decide how many children to have. 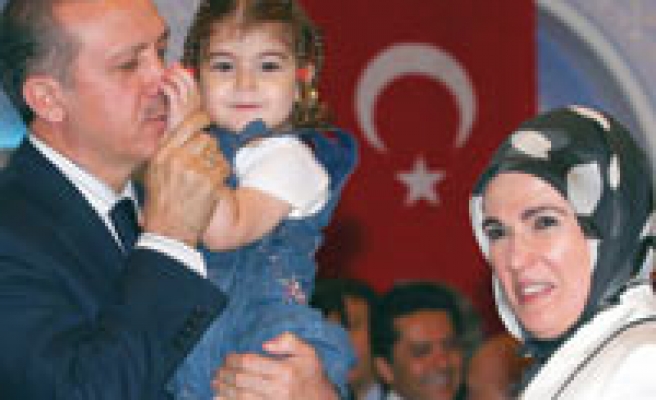 While Prime Minister Recep Tayyip Erdoğan's call for women to give birth to at least three children has received the support of some individuals and organizations, several others have said couples, not public officials, should decide how many children to have.

Erdoğan, addressing a group of women in a gathering held in İstanbul on March 8 to mark International Women's Day, urged them to have at least three children.

"Turkey currently has a young population, but if current trends continue it will be aging by 2038. Western societies are currently facing an aging population problem. Every family should have three children if we wish to preserve Turkey's young population. I have four children and I wish I had more. Children are a blessing," he said.

He also linked aging populations and low birth rates in European countries to economic recession, saying: "With a low annual population increase rate, the country will be in dire straits by 2038. Europe is experiencing this now. Look, Greece is unable to develop today."

His call for at least three children sparked different reactions in society. While some supported his call, saying people should have more children to preserve the population's dynamism, others said Turkey did not have the means to care for a larger population.

Health Minister Recep Akdağ, a father of five children, backed Erdoğan's suggestion, cautioning that a declining and aging population would bring with it serious problems.

In a meeting with the Turkish Health Union (Sağlık-Sen) earlier in March, Akdağ said the average number of children per family in Turkey was gradually decreasing.

"This number is around 2.1 [children per family] now. I believe serious problems will be brought about if this figure falls beneath two," he said.

He also noted that Turkish citizens have as many children as they can afford to raise. "You may call on people to have two or three children. The important thing here is that they have a number of children they can care for. But if families have fewer than two children, our population will gradually grow older and then we will face different problems. Calling on people to refrain from giving birth is wrong," remarked Akdağ.

A survey conducted by the Population Association of Turkey in collaboration with the United Nations Population Fund (UNFPA) published on March 11 revealed that Turkish youth have views similar to the prime minister's when it comes to how many children couples should have.

The survey aimed to determine the level of knowledge among Turkish youth on sexual and reproductive health and entailed the participation of around 3,000 respondents between the ages of 15 and 24 in roughly 3,500 households. A considerable majority of respondents said they would like to have three children and the average desire was 2.4 children.

Nurcan Müftüoğlu, deputy executive director of the Turkish Family Health and Planning Foundation (TAPV), however, said an increase in the number of children women give birth to increases mothers' and babies' health risks.

"Frequent pregnancies and pregnancies experienced when a woman is too young or old increase the health risks incurred by mothers and children," she noted in a phone interview with Sunday's Zaman. Asserting that husbands and wives should be the ones who decide on the number of children to have, Müftüoğlu said couples should take their economic might into consideration in their decision.

"Family planning aims at enabling couples to have healthy children when they wish to. Parents should have the final say on how many kids they should have," she stressed.

Müftüoğlu, emphasizing that Turkey faces serious problems in the field of health and health services furnished to citizens, noted such factors should be taken into consideration when couples intend to have many children.

"Our foundation has concerns at this point. The question of whether the state fulfills its duties in the field of mothers' and children's health concerns us directly," she remarked.

"The share earmarked to medical costs in 2008 is YTL 10.8 billion and represents only 4.85 percent of the general budget. However the World Health Organization [WHO] envisages this portion to be around 10 percent of the general budget. Turkey spent only $112 per capita on medical services in 2006. This figure was $1,301 in Switzerland, $977 in Greece, $803 in the United States, $422 in Canada and $403 in Germany," noted a Türk Sağlık-Sen official.

Chair of the Ankara-based Turkish Family Health Association (TAPD) Hakan Şatıroğlu, on the other hand, said calling on people to have more or fewer children was a human rights violation. "I cannot judge our prime minister for his call for at least three children. I am sure he took all the issue's social and economic aspects into consideration before uttering such remarks. As the TAPD, we can only tackle his call in terms of health and medical ethics. Giving birth to more than four babies increases the risk of maternal and infant mortality. Frequent pregnancies increase that risk as well," he said.

The government's ongoing efforts to improve prenatal care and promote breastfeeding have had profound effects on infant and under-age-five mortality rates, with infant mortality dropped to 24 per 1,000 births in Turkey in 2006, according to UNICEF.

Şatıroğlu, emphasizing that Turkey had undergone improvement in medicine in the last couple of years, noted infant mortality had dropped below 25 per 1,000 births.

According to information posted on WHO's Web site, maternal death is defined as the death of a woman while pregnant or within 42 days of termination of pregnancy, irrespective of the duration and site of the pregnancy, from any cause related to or aggravated by the pregnancy or its management but not from accidental or incidental causes.

A total of 1,400 mothers die each year in Turkey due to postpartum complications and 29 out of every 1,000 babies lose their lives before they reach the age of one. When Turkey's development rate and national income level are considered, infant mortality should not be that high. Even in China, Vietnam, Tunisia, Colombia and Ukraine, whose national incomes are much lower than Turkey's, the infant mortality rate is lower. TAPD's Şatıroğlu said Turkey was not at risk of an aging population.

"The Turkish youth want to have an average of 2.4 children, which means young people wish to have two to three children. This proves that there are not serious risks awaiting Turkey in the short run in terms of an aging population," he noted.

According to the latest population census results, released in January by the Turkish Statistics Institute (TurkStat), Turkey has a young population, with the average age calculated as around 28 years. Half of the population is younger and around 26 percent is under 14.

The issue as to how many children a Turkish couple should have has an educational aspect as well, said an Education Personnel Union (Eğitim-Sen) official who wished to remain anonymous.

"The current education system and the budget spared by the state for education do not meet the needs of existing students. There is a great lack of space for students at Turkish schools. How can a system with such serious flaws afford to educate more students?" she asked.

Data posted on Eğitim-Sen's Web site reveals that the budget earmarked to education in Turkey is far from meeting students' needs.

The budget spared for education in 2007 amounted to YTL 21.4 billion, a 26 percent increase over the previous year's allocation. However the education budget in OECD countries is much bigger than Turkey's.

While OECD countries earmark an average 13.3 percent of their budgets for education, this figure was around 9.5 percent in Turkey in 2006. It was 23.8 percent in Mexico, 22.6 percent in New Zealand, 17 percent in Iceland, 15.2 percent in the US, 15.1 percent in Denmark and 13 percent in Switzerland.

He stressed the hunger threshold in Turkey was much higher than the minimum wage. "A worker with a minimum wage earns less than YTL 500, but the hunger threshold for a four-member family is much higher. It means his wage is far from meeting even his family's need for nutrition. So how will he be able to afford his children's health and education costs?" asked Bağdadioğlu.

Stressing that the hunger and poverty thresholds are expected to rise in the months ahead due to a rapid increase in food prices triggered by a recent food crisis in various countries worldwide, Bağdadioğlu said it would become even harder for families to take care of their children.

"It is couples' decision to have as many children as they like, but I don't believe Erdoğan's call for at least three children per family will be appreciated by those who trying to care for their families with a minimum wage," he added.