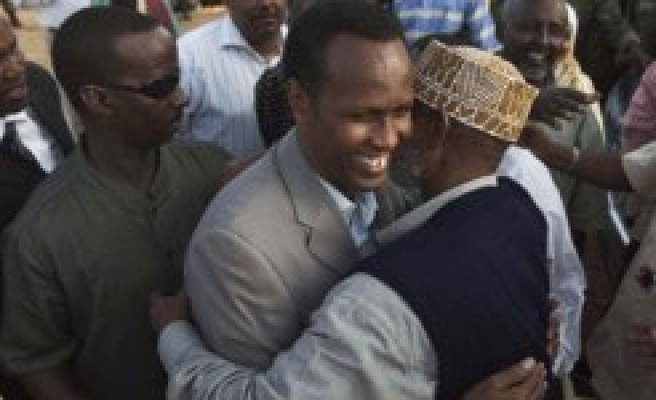 "Up until now we are using dialogue to remove them (Ethiopians) but if they refuse to cooperate ... we will set everything aside to remove the Ethiopians ourselves," Aidid told a joint press conference with Sharif and Hassan, reported Agence France-Presse (AFP).

The three senior leaders shared a stage under a Somali map emblazoned with a dove and the logo "Somalia for Somalis."

They asserted that the Somali people will unite against the "brutal occupation" of Ethiopian forces.

"Less than 10 percent of our forces are on the ground against the Ethiopians. No army, I can tell you that, can stop what is coming up," said Aidid, the housing minister in the West-backed interim government.

Sheikh Sharif, the head of the Islamic Courts executive council, said the interim Somali government has become a tool in the Ethiopian hands.

"It has become an instrument to implement Ethiopian policies in Somalia."

Ethiopian troops stormed Somalia last December to overthrow the Islamic Courts, which had restored order and stability in war-battered Somalia, in favor of the powerless interim government.

Sheikh Sharif called on the Somalis to continue resisting the Ethiopian occupation of their country.

"We congratulate the heroic people of Somalia, and their victorious resistance," he said.

"We call upon all citizens everywhere to oppose the Ethiopian occupation, defend their country and guarantee the freedom and independence of the nation."

"They are violating (the truce) by shelling the town and killing people aimlessly," said Ahmed Diriye, a spokesman for the Hawiye, the dominant clan in Mogadishu.

"What I can tell you is that Ethiopian forces have restarted the fighting again."

Diriye said the Ethiopians had reneged on a key term in the agreement requiring both sides to surrender territories acquired in recent fighting and to withdraw their forces from the frontline.

Leaders of the Ethiopian force have refused to meet again with the Hawiye elders until commanders of the resistance agree to attend.

Somalis traditionally view the Christian military giant across their border as a rival.

Independent analysts believe that any Ethiopian presence in Somalia was sure to provoke a response from the general population.


Sharif accused Ethiopians of committing a genocide against Somalis.

Sheikh Sharif accused Ethiopian troops of destroying Somalia and committing a genocide against its defenseless civilians.

"The Ethiopian bombings killed 1,680 Somalis and wounded hundreds others," he told the joint press conference.

Sharif called for setting up an international court to try those committing war crimes in Somalia.

Ethiopian troops unleashed on March 29 a massive onslaught on Somali fighters accused of attacking government and Ethiopian army positions in the capital.

Elders said that at least 1,000 people had been killed and more than 4,000 wounded in what humanitarian groups described as the worst fighting in 15 years.

Somalia has lacked an effective central government since the ousting of Mohamed Siad Barre in 1991.

More than 14 attempts to restore a functional government in Somalia have since failed.