Somalia peace deal will be signed in Mecca: UN envoy

A senior U.N. envoy claimed Somalia's new Islamist Sheikh Hassan Dahir Aweys has not taken over the country's exiled opposition, despite his claims to having become its new chairman. 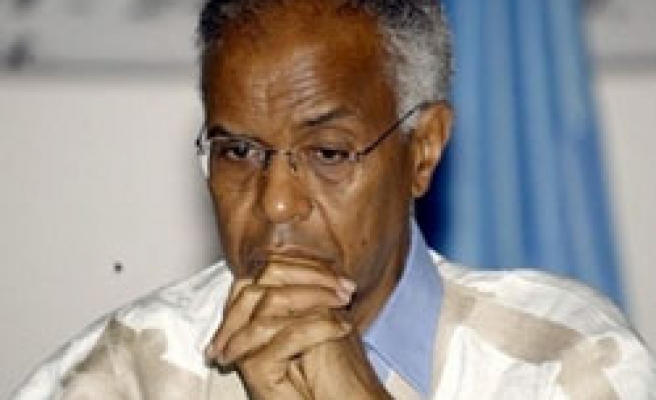 A senior U.N. envoy claimed on Friday Somalia's new Islamist Sheikh Hassan Dahir Aweys has not taken over the country's exiled opposition, despite his claims to having become its new chairman.

Earlier this week Aweys telephoned major media organizations from Eritrea and announced he had taken over as chairman of the Alliance for the Re-Liberation of Somalia (ARS) from Sheikh Sharif Ahmed.

"He was not not elected," U.N. special envoy for Somalia Ahmedou Ould-Abdallah said in an interview with a small group of journalists at U.N. headquarters.

"The leadership of the ARS has left Asmara (Eritrea's capital) in May," he said, adding that Sheikh Sharif remained the ARS's recognized and legitimate leader.

Ould-Abdallah said Aweys' claim was likely part of an internal media battle between him and others inside the ARS, an umbrella opposition alliance of the lawless Horn of Africa country.

Somalia's interim government and some members of the ARS initialed a deal in Djibouti last month calling for the deployment of U.N. peacekeepers, withdrawal of Ethiopian forces and agreeing to a ceasefire after a month.

Aweys and other Islamists rejected the pact.

The Djibouti agreement has not been formally signed. The formal signing is to take place in Mecca, possibly this month.

Ould-Abdallah said holding the signing ceremony in Mecca complicated the situation, because it will have to be approved and supported by the Saudis. But it will also have immense symbolic value for the parties.

"If you swear in Mecca, it commits you," he said.

Meanwhile, Ould-Abdallah said he has been negotiating with countries and U.N. officials about preparatory plans for a possible peacekeeping operation in Somalia.

It was not clear yet which countries would be willing to send troops, though he said it was unlikely any Western forces would take part.

He said there was discussion of a force of between 8,000 and 10,000 troops. Among the potential contributors could be Pakistan, India, Indonesia, Turkey or Jordan, he added.

Ould-Abdallah U.N. troops were would enable the phased withdrawal of Ethiopian troops, which all members of the ARS want out of the country, without creating a security vacuum.

AMISOM, the African Union peacekeeping force in Somalia, has authorized the deployment of 8,000 troops but has only 2,600 on the ground at present. The AU said earlier this week that it was not up to the task of stabilizing the country and asked the Security Council to replace AMISOM with U.N. forces.

While the 15 Security Council members all agree the situation is dire, most have been reluctant to send U.N. peacekeepers to Somalia, where warlords, Islamist insurgents and Ethiopiana and West-backed Somali government forces are battling.

Talk of U.N. intervention is still colored by memories of a battle in 1993 in which 18 U.S. troops and hundreds of Somali militiamen died. The incident inspired a Hollywood movie, "Black Hawk Down" and marked the beginning of the end for a U.S.-U.N. peacekeeping force.