The SAARC's main agenda of economic growth has long been held back by old rivalries among members. 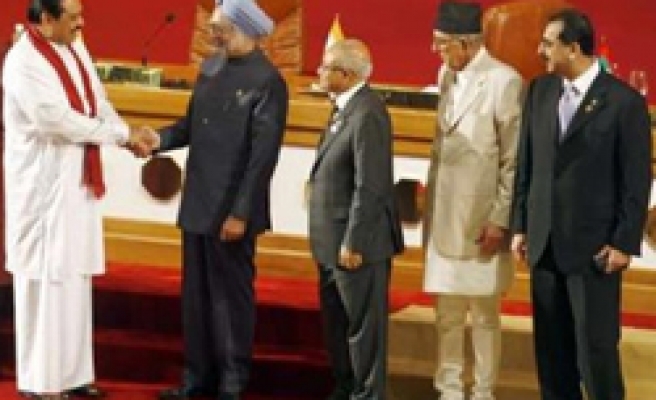 South Asian leaders signed a legal cooperation pact on Sunday aimed at combating terrorism, and agreed to set up a food bank to fight hunger in the face of rising food prices in one of the world's poorest regions.

But the South Asian Association for Regional Cooperation (SAARC), a forum of eight nations, made little progress on trade, the central theme of the group formed in 1985.

The summit provided no concrete steps to invigorate the South Asian Free Trade Area (SAFTA) agreement which came into effect two years ago but which has failed to take off.

Aimed at achieving zero tariffs on almost all products by 2012, SAFTA has witnessed squabbles over tariff concessions with Pakistan accusing India of violating the agreement with various non-tariff barriers.

Instead, terrorism in one of the world's most troubled regions, long haunted by rivalries between its most powerful members, India and Pakistan, dominated the summit.

Bangladesh, Nepal, Sri Lanka, Bhutan, the Maldives and Afghanistan make up the rest of SAARC, which represents around a fifth of the world's population.

"During the summit, there was clear recognition that terrorism has become a great menace throughout the world, including in our region," said Sri Lanka's president, Mahinda Rajapakse, who is also the current SAARC chair.

"South Asia cannot progress unless there is stability and security throughout the region."

The legal assistance deal will melt down borders among the SAARC countries when it comes to exchange of information and judicial processes related to crime and terrorism.

The SAARC's main agenda of economic growth has long been held back by old rivalries among members. The forum's summits have often failed to rise above the squabbles of India and Pakistan, mainly over the disputed Kashmir region, hurting progress on issues central to the bloc.

Even this time the summit's atmosphere was tense with India and Pakistan's peace talks at stake after India suffered a spate of bomb attacks last month.

Intra-SAARC trade remains at just over five percent of South Asian nations' total, compared to other regional forums such as Asean's internal trade at 26 percent and the European Union's 55 percent.

The summit also agreed to make South Asia "once again a major granary of the world, through a series of specific regional collaborative projects".

"To ensure continued nutritional security, we have directed that the SAARC food bank which will store stocks for distribution in case of a particular scarcity within the South Asian region, should be immediately operationalised," he said.