The dispute is one of a number of long-running territorial rows involving Japan and its neighbours. 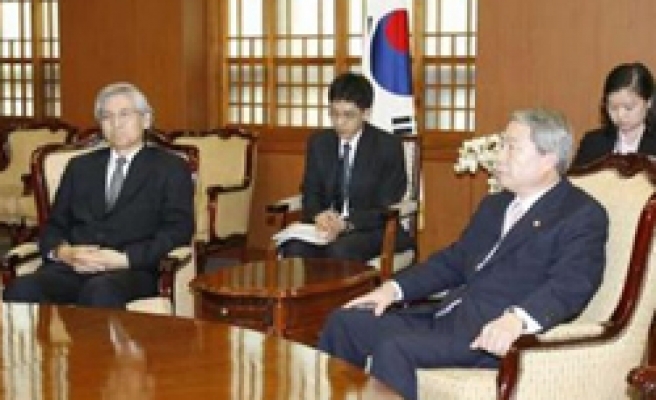 South Korea said on Monday it would recall its ambassador from Tokyo in protest after Japan said it would write about a longstanding island dispute in school teaching guides.

South Korea and Japan both lay claim to a group of desolate, rocky islets which Seoul calls Dokdo and Tokyo calls Takeshima. The area surrounding the islets has fertile fishing grounds.

The Japanese government said it had informed Seoul that Tokyo would refer in a middle school teaching guide to the islands as Japanese territory.

"President Lee Myung-bak said he cannot help being deeply disappointed and feeling regret, considering the agreement between the two leaders to face past history and build a forward-looking Korea-Japan relationship," South Korea's presidential office said in a statement. "Japan should not repeat its behaviour of promising a forward-looking relationship with Korea but then stirring up a dispute such as the Dokdo issue once in a while when the government changes."

Yonhap news agency reported that South Korea would step up its defence of the islands, citing a presidential official, but Japan's chief government spokesman called for composure.

"We want to avoid a situation where Japan-South Korea relations are influenced by each and every issue, and I hope both sides will calmly respond."

The document for teachers and textbook publishers, though non-binding, will likely influence classroom teaching and textbook contents, an official from Japan's education ministry said.

"It is necessary to touch on the fact that our country and South Korea have different claims over Takeshima and to deepen the understanding of our territory," the ministry said in the teaching guide.

The dispute is one of a number of long-running territorial rows involving Japan and its neighbours.

Last month a row over ownership of another group of tiny islands called the Senkaku isles in Japan, the Diaoyu in China and the Tiaoyutai in Taiwan, flared up when a Japanese coastguard vessel collided with a Taiwan fishing boat, sinking it and injuring one person.

School textbooks, seen as an expression of government views in many Asian countries, sometimes lead to international spats. In 2005, thousands of Chinese took to the streets to protest what they said was Japan's whitewashing of its World War Two history in schoolbooks.