Analysts said that to regain support, CEO-turned-politican Lee must change the perceptions of a public that sees him as too focused on his policy agenda and unwilling to listen to their concerns. 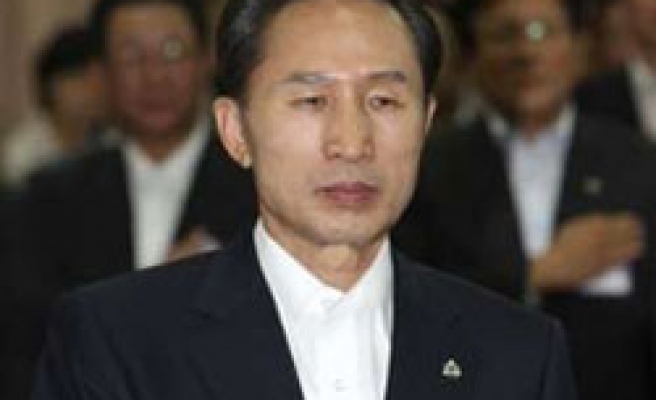 South Korea's new president will replace his chief of staff and members of his inner circle this week after an unpopular deal to import U.S. beef triggered street protests against his government, a spokesman said on Wednesday.

President Lee Myung-bak, the runaway winner of a December vote, has seen his pro-business plans to reform Asia's fourth-largest economy stall as the beef deal become a focal point of criticism for his four-month-old government.

"As for personnel, there will be a large scale change at the (presidential) Blue House secretaries' offices, including the chief of staff," spokesman Lee Dong-kwan said.

Lee's cabinet resigned en masse last week to accept responsibility for the beef deal. They have stayed at their posts and the president will soon name which ministers he will sack, spokesman Lee said.

Analysts said that to regain support, CEO-turned-politican Lee must change the perceptions of a public that sees him as too focused on his policy agenda and unwilling to listen to their concerns.

President Lee is also expected to make a speech on Thursday in which he apologises and asks for understanding over the deal he struck in April that would allow in all cuts of U.S. beef.

South Koreans, worried about mad cow disease, have called on Lee to renegotiate and stop imports of material they see as risky, such as beef cuts from older cattle.

U.S. and South Korean trade envoys have been meeting in Washington seeking a voluntary agreement that places limits on the beef trade.