Moscow has handed out thousands of Russian passports to S. Ossetian citizens, although the Kremlin has so far always stopped short of recognising it as an independent state. 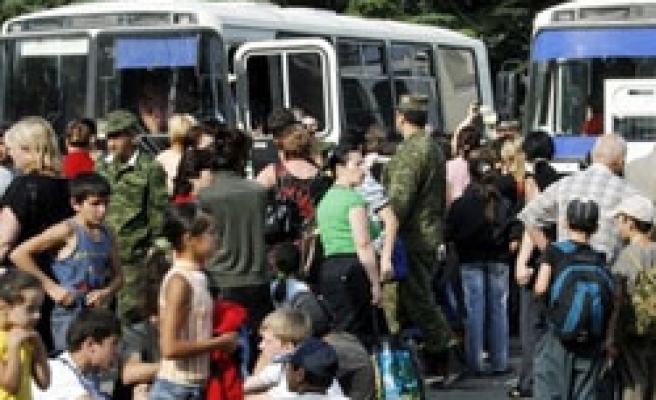 South Ossetia will ask the Kremlin to recognise its independence from Georgia, the leader of the breakaway region told a rally including widows and mourning mothers in his war-ravaged capital on Thursday.

Eduard Kokoity, who styles himself president of a country not recognised by any other nation, told a rally of several thousand that Georgia had undermined its own statehood by trying to seize his region by force on Aug 7-8.

Widows and mothers in black, with photographs of their loved ones pinned to their chests, shed tears in the shadows of bombed-out houses on the central square of Tskhinvali as Kokoity lambasted Georgia and its Western backers.

The small, pro-Russian province in the Caucasus mountains, which broke away from Georgian rule in 1992 after a war, saw renewed fighting this month after Georgia tried to impose control in a failed invasion repelled by Russian forces.

"I have already prepared an address to the President of the Russian Federation, to the Federation Council and State Duma, and to the heads of state of the international community, with a request to recognise our independence," Kokoity said.

"Georgia itself has driven a nail into the coffin of its statehood," said Kokoity, a former Soviet wrestling champion, who wiped away tears as he spoke under a beating sun.

"We proudly say today that we deserve to live in a free and independent republic of South Ossetia," he said. "The recognition of our independence is not a whim of the Ossetians; this is a security guarantee for our tiny people."

South Ossetia, a region of about 70,000 people, is supported by Russia. Moscow has handed out thousands of Russian passports to its citizens, although the Kremlin has so far always stopped short of recognising it as an independent state.

Georgian President Mikheil Saakashvili, who sparked the conflict by shelling Tskhinvali earlier this month, has vowed to bring South Ossetia and another rebel region, Abkhazia, back under Tbilisi's control.

The deputy head of Russia's upper house of parliament told the rally that Russia would stand by South Ossetia.

"You must remember that Russia is always with you and that Russia will never leave you in the lurch," said Federation Council Deputy Speaker Svetlana Orlova.

"The Americans together with Saakashvili would of course like to be the commanders of the Caucasus but this will never happen. Russia was, is and will be always be present in the Caucasus."

South Ossetia says Georgian troops went on the rampage and accuse Saakashvili of attempting a genocide of the South Ossetians, who are ethnically different from Georgians. Georgia says Ossetian bands have looted and shot ethnic Georgians in and around South Ossetia after regaining control of the area.

Kokoity said Georgia was a "a bloodthirsty regime" and that Saakashvili should go on trial for genocide.

"All responsibility for the genocide of the tiny Ossetian people lies with the leaders of Georgia, the United States and Ukraine, and they must be put on trial," Kokoity said on the square, which leads from the town's main road, Stalin Street.

Later on Thursday, Valery Gergiev, one of Russia's most famous conductors, will hold a concert in Tskhinvali. Currently director of the Mariinsky Theatre, he was born in Moscow but spent his childhood in North Ossetia.