Mission managers on Saturday cleared Atlantis to land next week after concluding the space shuttle's heat shield was safe enough to withstand the intense heat of re-entering Earth's atmosphere. 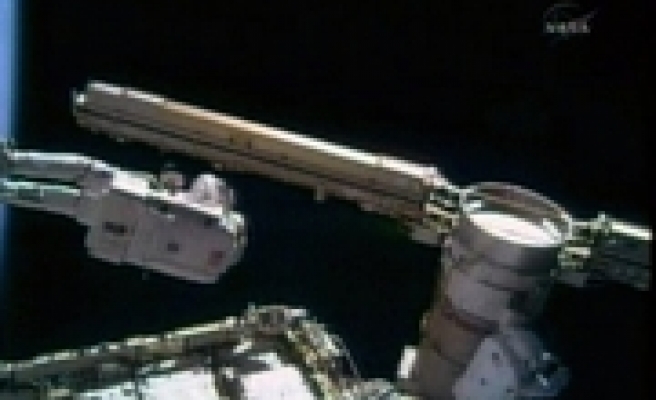 The clearance came a day after astronaut Danny Olivas, during a spacewalk, stapled down a loose thermal blanket that covered an engine pod near the shuttle's tail. The blanket peeled back during the June 8 launch from the Kennedy Space Center.

NASA has been sensitive about the space shuttles' heat shields ever since the Columbia accident killed seven astronauts in 2003. A piece of insulating foam from the shuttle's external tank came loose during launch, striking Columbia's wing and allowing fiery gases to penetrate it during re-entry.

Atlantis' astronauts plan another inspection of the heat shield after the shuttle undocks from the international space station, scheduled for Tuesday.

However, mission managers may still extend the shuttle's docking at the station by a day to buy more time for engineers in Moscow and Houston to figure out why the computer system on the Russian side of the station crashed.

Russian cosmonauts Fyodor Yurchikhin and Oleg Kotov were able to get four of six processors on two computers working again Friday by using a cable to bypass a circuit board.

On Saturday, they began turning back on some crucial systems, including a carbon dioxide scrubber, which had been shut down more than four days earlier. They also planned to use more jumper cables to try to restart the two remaining processors which weren't working.

The German-made computers control the station's oxygen supply and maintain its correct position in orbit, allowing it to point its solar panel arrays at the sun to generate electricity and to shift orientation to avoid occasional large debris flying through space.

The computer problem had raised the possibility the space station's three-person crew might have to abandon the outpost. NASA officials rejected such a scenario.

"We feel like the computers are stable and back to normal," said Mike Suffredini, NASA's manager of the space station program.

Engineers were still trying to determine the cause of the computer failure, Suffredini said.

"It's just that I'm in the right place at the right time," Williams said when Mission Control congratulated her on the record. "It's just an honor to be up here. Even when the station has little problems, it's just a beautiful, wonderful place to live."

The seven Atlantis astronauts and the three space station crew members planned to spend most of Saturday moving supplies and trash back and forth between the vehicles and preparing for the mission's fourth spacewalk on Sunday.

During the failure, the shuttle's thrusters helped control the station's position. Some of Atlantis' lights, computers and cameras were turned off to save energy, but NASA officials said the crew was never in danger of running out of oxygen, power or essentials.

The 11-day space station construction mission had already been extended by two days so the rip in the shuttle's thermal material could be fixed during Friday's spacewalk.

During that nearly eight-hour excursion, astronauts also finished folding up a 115-foot solar panel wing on the space station. It took several days to put away the wing, which needed to be retracted to make way for a newly installed pair of solar panels.