A robotic spacecraft circling Mars has snapped the first image of a series of active avalanches near the planet's north pole, scientists said Monday. 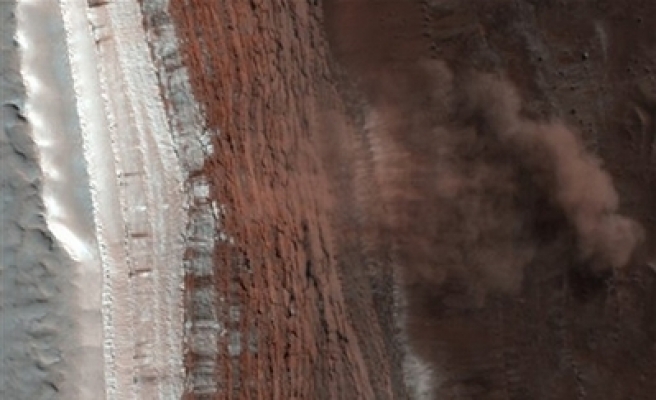 The image, taken last month, reveals at least four avalanches of fine ice and dust breaking off from a steep cliff and settling on the slope below. The cascade kicked up massive debris clouds, with some measuring more than 590 feet across.

The landslides were spied by the Mars Reconnaissance Orbiter during a routine tracking of seasonal changes. The probe arrived at the planet in 2006.

It is rare for scientists to catch a natural event in action on the surface of Mars. Most of the landscape that has been recorded so far has not changed much in millions of years.

The avalanches occurred near the north pole and broke part of a 2,300-foot cliff.

"We were checking for springtime changes in the carbon-dioxide frost covering a dune field and finding the avalanches was completely serendipitous," Jet Propulsion Laboratory scientist Candice Hansen said in a statement.

Scientists were unsure what set off the avalanches and whether they occur frequently or only during the spring.