Space shuttle astronauts will attempt to repair Atlantis' damaged heat shield during a spacewalk on Friday, using staples to try to pin down a loose thermal blanket, managers decided. 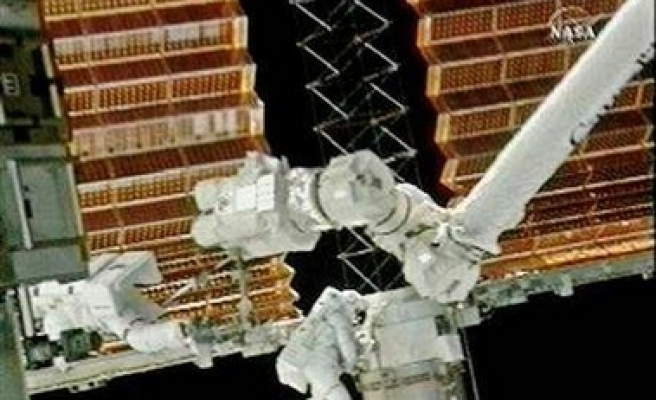 Space shuttle astronauts will attempt to repair Atlantis' damaged heat shield during a spacewalk on Friday, using staples to try to pin down a loose thermal blanket, managers decided on Wednesday.

'They decided to do the repair on the third spacewalk on Friday,' NASA spokesman Kyle Herring said after emerging from a management meeting at Houston's Johnson Space Center.

The preferred method will be surgical stapling and pinning back in place the piece of heat-shield blanket that pulled loose from an engine pod as the shuttle launched Friday for a construction mission to the International Space Station.

The decision was made as two astronauts carried out a spacewalk from the docked shuttle and station Wednesday to finish work expanding the station's power solar-powered electrical system.

The U.S. space agency has been meticulous about monitoring and maintaining the condition of shuttle heat shields since Columbia disintegrated during its return to Earth in 2003, killing all seven astronauts aboard.

The blanket problem is small, a 4-inch-by-6-inch gap near the rear of the shuttle, and is not considered a serious threat, but managers want to avoid risking minor shuttle damage during the fiery reentry into the atmosphere for landing.

NASA needs all three remaining shuttles in good shape to complete 12 more space station construction missions by 2010 when the shuttles are scheduled to be retired.

Plans call for one astronaut to do the repair work while standing on the shuttle's robot arm. If stapling and pinning do not work, sewing would be the next alternative, Herring said.

What originally was planned as an 11-day mission to boost power at the station has been extended two days to assure the repairs can be done prior to landing. A fourth spacewalk already has been planned for Sunday and could be used to finish if necessary.

As for Wednesday's spacewalk, astronauts Patrick Forrester and Steven Swanson stepped out of the orbital outpost shortly after 2:30 p.m. EDT (1830 GMT). They were scheduled to work six and a half hours.

After the 2003 Columbia disaster, which was blamed on a piece of insulating foam falling from the fuel tank and puncturing a wing heat shield, NASA resumed station assembly a year ago after post-Columbia shuttle upgrades.

The first priority is to assemble the exterior beams and boost power supplies so long-delayed laboratories built by Europe and Japan, U.S. partners in the station, can be attached.

Atlantis delivered a pair of massive solar wing panels that were installed during the mission's first spacewalk on Monday. Forrester and Swanson on Wednesday were to remove restraints so the new panels can rotate and track the sun for power.

The astronauts also spent about an hour beginning to fold up an older solar panel that will be moved to a new location on a later flight. The old panel now blocks the new wing's rotation. They got about half of the 115-foot-(35-metre-)long array retracted.

NASA's last construction crew, which flew to the station in December 2006, had to make an unplanned spacewalk to coax a similar balky panel back into a storage box.

Prior to adding the blanket repair, the third spacewalk on Friday by astronauts James Reilly and John 'Danny' Olivas was to be dedicated to completing retraction of the older wing panel. Last Mod: 14 Haziran 2007, 14:40
Add Comment