Spain's National Court on Tuesday announced a probe into the deaths of six peacekeepers of the Spanish army in southern Lebanon, prohibiting the incineration of their bodies. 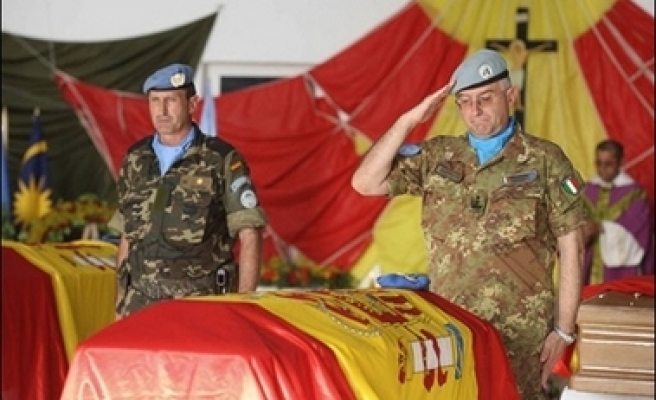 Spain's National Court on Tuesday announced a probe into the deaths of six peacekeepers of the Spanish army in southern Lebanon, prohibiting the incineration of their bodies.

Spanish law allowed the Spanish judiciary to investigate crimes such as terrorism even when committed outside national territory, judicial sources quoted judge Fernando Grande-Marlaska as saying.

The United Nations and Lebanon are already investigating the car bombing which killed the Spanish and Colombian peacekeepers on Sunday.

Judge Grande-Marlaska requested reports on the soldiers' deaths from the government, and prohibited the incineration of their bodies, though relatives may bury them.

The announcement followed a state funeral for the peacekeepers, who were to be buried in their places of origin.

The soldiers, who formed part of a 1,100-strong Spanish contingent within the 13,000-member United Nations Interim Force in Lebanon (UNIFIL), were hit by a car bomb when they were patrolling a road between Marjeyoun and Khiam north of the Israeli border.

The peacekeepers had given their lives in a world 'in need of peace,' military archbishop Francisco Perez said in his homily.

One group of relatives displayed a Colombian flag in a reminder that three of the victims, who were aged between 18 and 21 years, were citizens of the Latin American country.

Felipe placed medals on the coffins draped in Spanish flags. The peacekeepers had already been decorated by Lebanon in a ceremony staged there.

Their remains were flown to Spain overnight on board a military plane also carrying Defence Minister Jose Antonio Alonso, who was returning from a visit to Lebanon after the attack.

Tuesday was declared a national day of mourning, with flags flown at half-mast.

Spanish troops in Lebanon were put on maximum alert.