The families of the victims who have sued the Dutch state and UN for failing to prevent the killings, say, "We want to return dignity to the victims." 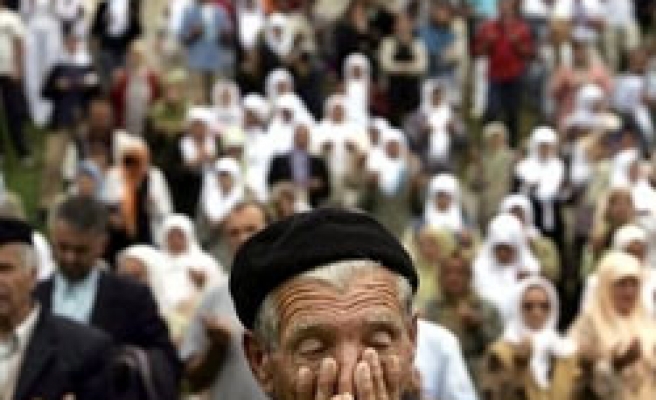 Three sets of bones are neatly displayed next to each other in aluminium cases in a basement in northeast Bosnia: they are three of four brothers killed in the 1995 Srebrenica massacre.

The two older brothers were identified through DNA from their children, but it is not known which of the two younger brothers is the third set of remains. They had no children and DNA analysis does not distinguish between siblings.

The bones will stay in the cases in the Lukavac Re-Association Centre, about an hour's drive from Srebrenica, until the fourth body is discovered.

Their family wants all to be buried together in the Potocari memorial near Srebrenica, the final resting place for the 8,000 Bosnian Muslim males killed by Bosnian Serbs in one week in the last months of the 1992-95 war.

Most of them will have travelled a long way before making it to Potocari. The Serbs buried the victims, then dug them out with bulldozers and transferred them elsewhere to hide the crime. Dozens of such graves are still being excavated today.

Her colleague slowly removes human bones from a plastic bag, detaches smaller bones from big ones and carefully washes them. Men's shirts, ragged and washed out, hang on a plastic drier.

"We try to piece them together and make them as complete as possible before they go for burial to their families," Martin said.

Martin and her team have to date identified some 5,200 victims of Europe's worst atrocity since World War Two.

Each year, bones matched to a name are buried in a mass funeral on July 11, the anniversary of Srebrenica's fall.

Relatives say the ceremony is a relief, but changes nothing in their quest for justice.

The Dutch unit of the United Nations peacekeeping force that was meant to guard the 'safe haven' town was told to pull out and allow Bosnian Serb general Ratko Mladic to take over Srebrenica. Mladic, indicted for genocide, is still at large.

The families of the victims have sued the Dutch state and the United Nations for failing to prevent the killings.

"We want to return dignity to the victims," said Munira Subasic, who lost her husband and son in the massacre. "We hope to win the suit (in The Hague) and get the truth and justice so that what happened to us may never happen again."

Regardless of what happens in the courtrooms of The Hague, truth and justice will not come easily at home: the country's Muslims, Serbs and Croats, living divided in two autonomous halves, are still largely suspicious of each other.