Russians have flocked to bid a final farewell to Boris Yeltsin on a national day of mourning for the funeral of the man who brought down the Soviet Union and forced through painful democratic reforms. 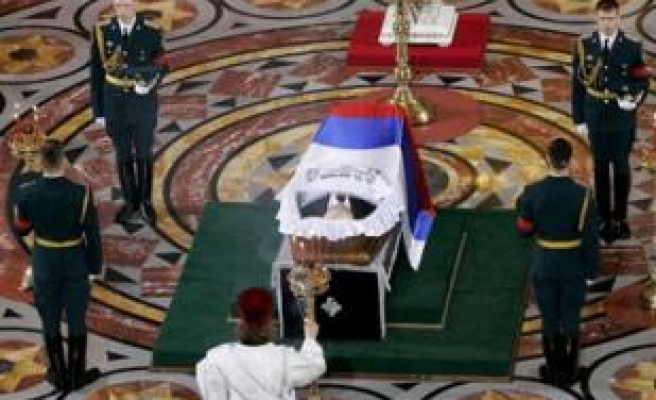 Several thousand people queued under grey skies outside Moscow's Christ the Saviour cathedral to pay their last respects to the first post-Communist leader, who lay in an open coffin draped in the Russian tricolour flag and surrounded by red candles.

Vladimir Putin, the Russian president, former US presidents Bill Clinton and George Bush senior and the last Soviet leader, Mikhail Gorbachev paid their own respects before Yeltsin's widow, Naina, and the Yeltsin family at a private ceremony before the official funeral.

Yeltsin, who died on Monday of a heart attack, aged 76, was then to be taken for burial at the 16th century Novodevichy convent, alongside the likes of Anton Chekhov, Mikhail Bulgakov and Sergei Prokofiev.

About 20,000 people attended the lying-in-state starting late on Tuesday and continuing throughout the night.

They filed past the coffin carrying flowers and portraits of Yeltsin as Orthodox priests in white robes chanted hymns in the cathedral.

Christ the Saviour cathedral is a replica of a church blown up by Joseph Stalin in 1931, the then general secretary of the Communist party, and reconstructed under Yeltsin as a symbol of post-Soviet Russia's religious rebirth.

Jonah Hull, Al Jazeera's correspondent in Moscow, said: "It is the first time in over 100 years that a Russian leader gets an Orthodox church funeral so the ceremony doesn't really adhere to any rules."

The Kremlin declared a day of mourning and flags were lowered nationwide. State-run television broadcast almost continuous coverage of the ceremonies.

However, huge crowds were not expected, reflecting widespread dislike for the larger-than-life leader, who took Russia through the trauma of the 1991 Soviet collapse, economic "shock therapy", a savage war in Chechnya, and often corrupt privatisation of state property.

Doctor Nikolai Churyumo, 57, holding a bunch of red carnations outside Christ the Saviour said: "Yeltsin freed me from the Communist disease. He gave me back my property.

"Now there's a drift from Yeltsin's policies. People have forgotten what he achieved."

In addition to the former US presidents, foreign dignitaries at the funeral were to include Britain's former prime minister, John Major and the German president, Horst Koehler, as well as leaders of former Soviet republics freed from Moscow's grip.

George Bush, the US president, hailed a "historic figure who served his country during a time of momentous change".

Tony Blair, the British prime minister, applauded a "remarkable man who... played a vital role at a crucial time".

However, a large majority of Russians now have mostly painful memories of Yeltsin's rule, according to polls.

His reforms led almost overnight to economic turmoil, spiralling prices, and the wiping out of pensioners' savings, while a handful of businessmen raked in vast fortunes.

Even some liberals are critical of Yeltsin, pointing to his disastrous decision to launch a war in rebel Chechnya, his alliance with corrupt business tycoons, and his handing over of power in 1999 to Putin, an ex-KGB officer who has restored stability but undermined democratic institutions.