The European Union opened accession talks yesterday on two more chapters with Turkey in the wake of the French veto on economic and monetary policy. 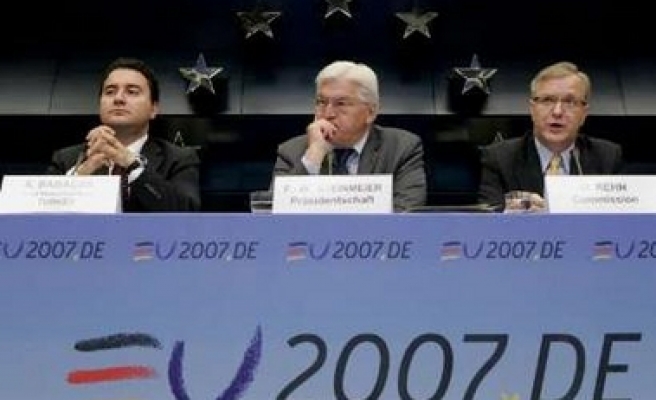 The European Union opened accession talks yesterday on two more chapters with Turkey in the wake of the French veto on economic and monetary policy.

German Foreign Minister Frank-Walter Steinmeier, whose country holds the rotating European Union presidency, made it clear that he, too, was not happy with the French position. At a press conference he held together with State Minister Ali Babacan, Turkey's chief negotiator for EU talks, and EU Enlargement Commissioner Olli Rehn after an accession conference in Brussels, Steinmeier underlined more than several times that the EU should be fair to Turkey and respect all of its commitments.

The German minister, replying to a question by Today’s Zaman whether he was concerned that France might be derailing the Turkish membership process in favor of a privileged partnership, said the bloc still sticks to the principle of “pacta sunt servanda” -- a basic principle of international and civil law meaning “pacts must be respected” by all sides. Steinmeier said Turkey had made very courageous reforms and that the EU should keep supporting its accession process.

France, citing technical reasons, blocked the opening of talks on economic and monetary policy yesterday, but diplomats say Paris opposition is purely political rather than technical. Paris argues that the chapter is central to EU membership and could prejudge the final outcome of negotiations. Newly elected Sarkozy has previously made clear that he does not want Turkey in the EU. Sarkozy is also asking the EU for a new Turkey summit in December in a bid to divert the Turkish membership process to one of privileged partnership.

Speaking after Steinmeier, Rehn -- in an apparent reaction to the French position -- said both statistics and financial control were also directly related to membership. Analysts say Steinmeier’s statement on “being fair to Turkey” was quite forthright considering the very close ties between Paris and Berlin. They also say Rehn made it clear that the French rationale of talks on economic and monetary policy being directly related to membership was baseless.

Babacan: Turkey not satisfied by EU explanation Attending yesterday’s intergovernmental accession conference, Babacan declared that Turkey was not satisfied with the explanation the EU offered to justify its failure to open talks on the economic and monetary policy chapter.

“We are not satisfied with the technical justifications that were given to us, and we hope that there will be progress in this matter during the Portuguese presidency [of the EU in the second half of this year],” he told the press conference.

Warning the EU that a rejection of Turkey would have global repercussions beyond European borders, Babacan implicitly asked other members not to let France intervene to derail the process. Saying that it was “important for both sides to maintain confidence” in making progress in the entry talks, Babacan added, “Otherwise not only Turkey but the EU will be damaged by this.”

“Member states should not let certain members raise obstacles against the negotiating process. In order to keep the process on track, it is important to have the belief that both sides share the same will to advance the negotiations,” he said.

Rehn tried to play down the French obstruction, saying talks in statistics and financial control also had very important implications for EU membership.