Two days of heavy storms and flooding had killed five people in central Texas by Friday, and bad weather was expected to continue pounding the Plains over the holiday weekend. 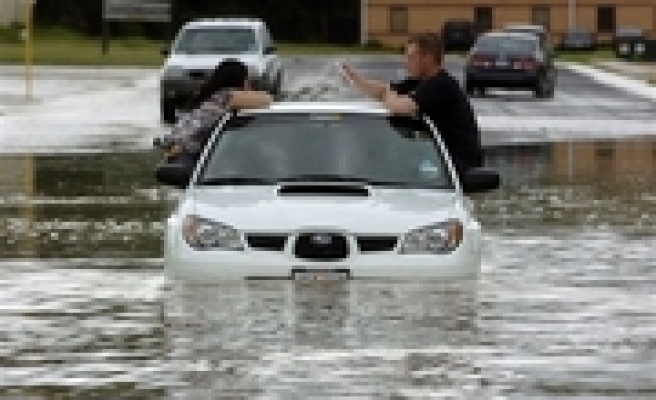 A man remained missing in Texas after his sport utility vehicle was swept away in a swollen creek, officials said. Several other people were rescued, and Gov. Rick Perry activated search and rescue teams.

Three people died in Killeen, police said. The bodies of two brothers, ages 5 and 6, were found early Friday in a submerged SUV. The boys were riding with their mother and two siblings when their vehicle was wiped off the road Thursday into a gully.

Rescuers saved the mother and two siblings, but the swift-moving water rose too quickly for rescuers to help the boys trapped inside, said Garland Potvin, a Bell County justice of the peace.

Elsewhere in Killeen, the body of a 20-year-old man caught in rushing water was found lodged along a culvert, Potvin said.

Authorities were searching near Fredericksburg for Edgar Garcia, 22, who was washed away in his SUV during storms that have dumped about 8 inches of rain in the area since Thursday.

Lt. Jim Judd of the Gillespie County sheriff's office said about 30 people spent Friday looking for Garcia, who called his mother after he drove around a barricade blocking a swollen creek and got stuck.

Perry activated National Guard troops to be deployed in Waco, Austin and San Antonio for the weekend.

In Kansas, rivers and creeks continued to rise Friday in the central and south-central parts of the state following a downpour two days earlier. The most serious flooding was expected along the Arkansas River in Harvey County, the National Weather Service said.

At least 60 homes and businesses were flooded but no injuries were reported, and only voluntary evacuations had been ordered.