A pipeline carrying nearly half of Britain's oil was closed on Sunday as a strike over pensions began at the neighbouring Grangemouth refinery in Scotland, operator BP said. 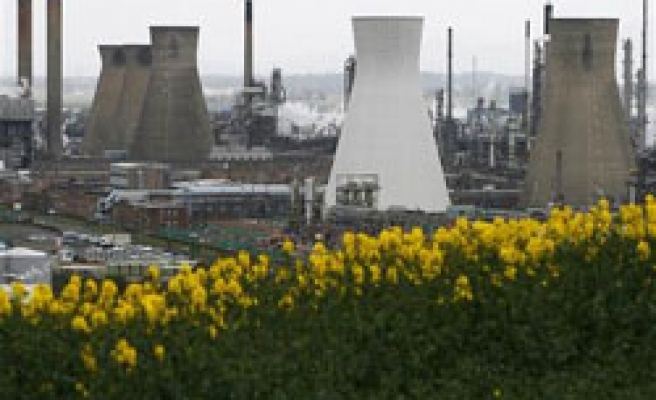 Unions have rejected pleas to operate the steam plant at the level necessary to keep Kinneil functioning during the two-day stoppage which began at 0600 BST (0500 GMT).

The company said that assuming it got power back as soon as the strike ended and Forties fields resumed production rapidly, the pipeline could be back in operation within 24 hours but might take a few more days to get back to full flow.

The strike is the first to close a British refinery in more than 70 years.

The Forties pipeline carries an average of 700,000 barrels per day (bpd), close to half the 1.5 million barrels the country produces daily. One fifth of Britain's gas supply also relies on the Forties system.

The Forties oil alone is worth 50 million pounds ($100 million) a day and the pipeline's closure will make a significant dent in already stretched government coffers which take half of the revenues in tax.

Management at the 200,000 bpd Grangemouth refinery met officials of the UNITE union on Saturday but failed to get a deal that would allow the pipeline to continue operating.

On Saturday industry lobby group Oil & Gas UK said the dispute was holding the country to ransom and urged the government to step in.

The strike, which has caused some fuel shortages in Scotland and northern England as motorists have stocked up despite government pleas not to do so, comes just days before local elections in England and Wales.

The May 1 vote will be seen as the first electoral test of Prime Minister Gordon Brown.

Brown, finance minister for a decade under Tony Blair, took over the top job in June last year and has had a torrid time ever since with scandals over lost data and rebellions in his own party compounded by rising energy prices and now capped by the global credit crunch.

European diesel prices have shot up in the last week on worries about a fuel shortage because of the Grangemouth strike.