Labor Platform trade unions went on a nationwide partial strike yesterday, bringing life to a halt for many, in protest of a new social security bill passed by a parliamentary commission last week. 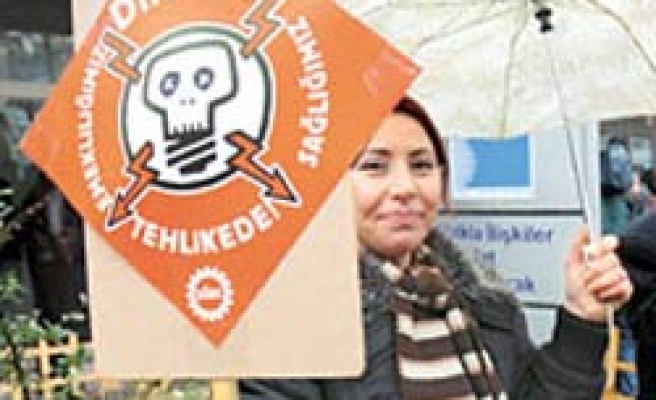 Labor Platform trade unions went on a nationwide partial strike yesterday, bringing life to a grinding halt for many, in protest of a new social security bill passed by a parliamentary commission last week.

After these developments, the government took a step back, making further evaluations of and necessary amendments to the bill. The government also plans to once again revisit the issue of retirement.

During the strike, which lasted from 10 a.m. to noon, only emergency room doctors remained on duty.

Prime Minister Recep Tayyip Erdoğan criticized the industrial action, emphasizing that it had no legal basis.

The Kadıköy district served as the main gathering point for protesters on İstanbul's Asian side. Trade unions such as the Confederation of Revolutionary Workers' Unions (DİSK), the Turkish Public Workers' Labor Union (Kamu-Sen) and the Confederation of Public Sector Trade Unions (KESK) began their rallies in several places, eventually gathering in Kadıköy Square. Meanwhile education union members gathered in front of Marmara University's Göztepe campus to protest the bill.

Trains departing from Haydarpaşa Train Station were disrupted for two hours. United Transporters Union (BTS) İstanbul Branch 1 President Hasan Bektaş said this partial strike was a warning to the government, adding that if the bill is passed by Parliament, a full strike will take place.

In Ankara, Labor Platform trade union representatives and Confederation of Turkish Labor Unions (Türk-İş) President Mustafa Kumlu gathered at the Türk-İş headquarters and walked to the Başkent Electricity Distribution Company offices. Kumlu gave a speech in which he expressed concerns and objections about the new social security bill, noting the various labor organizations had declared their discomfort many times and at every meeting. He said a decision has been made to use the "right not to work" for two hours across the country.

'GOVERNMENT NOT TAKE ANY STEP TO MEET THE DEMANDS'

Kumlu pointed out that the government had listened to them but did not take any concrete steps to meet their demands. He said if their objections are not addressed, they would protest the bill on the day it is to be discussed by Parliament. "Until now we were always in favor of dialogue and compromise, but no steps have been taken," he told a crowd protesting the bill.

Kumlu said they were ready to cooperate with a government that protects justice, democracy and people's rights. "We have a single and innocent aim. We want to keep wage earners at peace and happy under the roof of a socialist state," he said, rejecting claims that ideology was behind the protests.

Education Personnel Union (Eğitim-Sen) Chairman İsmail Koncuk made a speech on behalf of teachers that joined the strike. He said the government should respond to democratic reactions and that they were not only striking for teachers' rights but also for the rights of all wage workers.

In Antalya, workers and civil servants gathered in front of the Department of Revenue to protest the new social security bill

Some of the regulations that the Labor Platform objects to in the new social security bill are:

* Currently the retirement age is 58 for women and 60 for men; the new bill gradually increases this benchmark to 65 and the obligatory number of working days to 9,000 from 7,000.

* The new regulation removes seniority allowances and severance pay in some sectors.

* The minimum amount of time one must have worked to qualify for a disability annuity increases to 10 years from five years and obligatory working days increases to 1,800 days from 900 days.

* The development rate coefficient, used for calculating pensions and other benefits, will be reduced to 0.30 for pensions.

* The base level for work accident compensations is being removed.

* The widows' pension rate for the childless will be reduced to 50 percent from 75 percent of the husband's final salary.

* Maternity payment, paid for six months at the rate of one-third of the mother's monthly salary, will be reduced to a single payment.

* The types of medical treatment methods and the amount of medicines given that will be covered by state insurance will be determined by the Social Security Institution (SGK) instead of hospitals.

* Health insurance coverage for workers who leave their jobs will drop to 10 days. Workers are currently covered for six months