A general strike was observed in Karachi and other major Pakistani cities Monday to protest violence that left 41 dead amid growing discontent over President Gen. Pervez Musharraf's ouster of the chief justice. 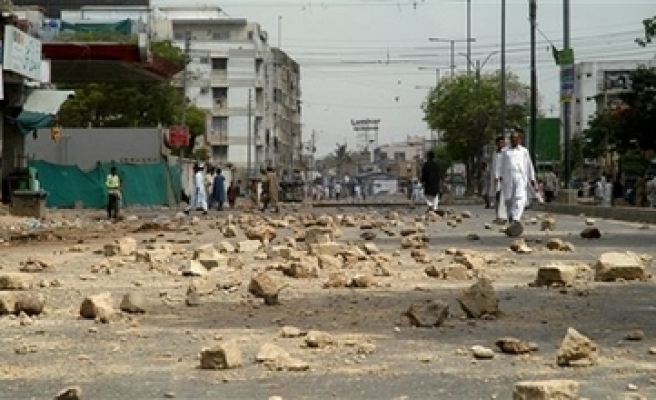 A general strike was observed in Karachi and other major Pakistani cities Monday to protest violence that left 41 dead amid growing discontent over President Gen. Pervez Musharraf's ouster of the chief justice.

Shops were shut and traffic was thin on the roads in the southern port city, where security forces now have authority to shoot rioters on sight, after the weekend witnessed the worst political violence to hit Pakistan in years.

Security forces on Saturday took no action as rival groups demonstrating over an aborted visit to Karachi by suspended Chief Justice Iftikhar Mohammed Chaudhry fought fierce clashes that also wounded more than 150 and caused widespread damage to property. Opposition parties blamed the government for the violence and called Monday's strike.

"There is a complete strike in Karachi," said Azhar Faruqi, the city police chief.

He reported that law and order was improving — after the unrest took an ominous ethnic turn on Sunday with clashes between Urdu-speaking Mohajirs linked to a pro-government party and Pashtuns, a rivalry that has caused bloodshed here in the past.

Officials said the strike was being observed in towns and cities across southern Sindh province, of which Karachi is the capital. It was also observed in the capitals of Pakistan's other three provinces, Lahore, Peshawar and Quetta.

"Today's strike is a referendum against Musharraf, and we think he should step down as soon as possible," said Ameerul Azeem, a spokesman for the Mutahida Majls-e-Amal, an opposition coalition of religious parties.

The weekend's violence marked a serious escalation in a crisis that began March 9 when Musharraf suspended Chaudhry, and has hardened opposition to plans for Musharraf, a key U.S. ally, to extend his nearly eight-year rule.

Musharraf plans to seek another five-year term as president this fall. Critics say his ouster of the independent-minded judge was designed to head off any legal challenges that would likely arise if Musharraf also retains his position as army chief. The government denies the move was politically motivated and says the judge had abused his office.

Newspaper editorials Monday were scathing of the government.

The Daily Times accused Musharraf of sanctioning "brutal action to stop the chief justice in his tracks, leaving more than 40 dead."

"What message is given to ordinary Pakistanis, the outside world and those behind the violence when the state chooses to abdicate from its duty to provide security in as blatant a manner as seen over the weekend?" The News daily wrote.

Sindh Home Secretary Ghulam Muhammad Mohtarem said Sunday that 3,000 extra paramilitary rangers had been called into Karachi and that security forces were authorized to shoot to counter any "major breakdown of law and order."

In the capital, Islamabad, the Supreme Court began hearing a raft of petitions challenging Chaudhry's suspension, but proceedings were adjourned after one of the 14 judges objected to hearing the case. Proceedings were due to resume Tuesday with the remaining 13 judges. A few dozen pro-Chaudhry lawyers rallied and chanted slogans outside the court.

Also Monday, gunmen shot and killed a senior administration official of the Supreme Court at his home in the capital. Police said they believed robbers were responsible, and the killing was unlinked to the judicial crisis. Last Mod: 14 Mayıs 2007, 13:17
Add Comment