About 200 people were stranded on board a train that was still halted more than eight hours after the quake hit. 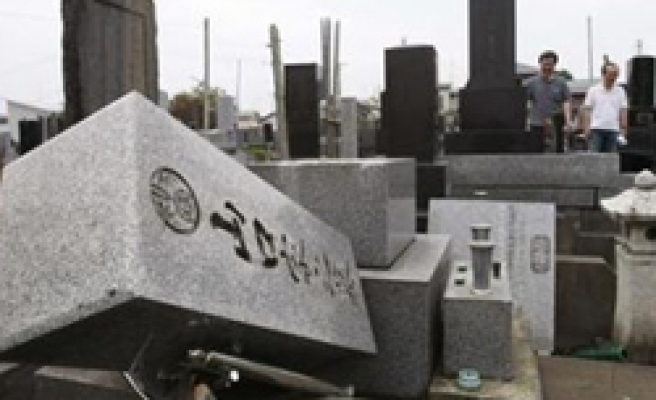 The quake, which struck at 00:26 a.m. (11:26 a.m. EDT Wednesday) and had a preliminary magnitude of 6.8, the Japan Meteorological Agency said, was the latest in a series to hit the sparsely populated, mountainous region.

A National Police Agency official said 99 people were injured, 17 seriously. Many were hurt in falls or suffered cuts from broken glass.

Officials warned of possible landslides, but with few strong aftershocks to hamper operations, the clean-up started almost immediately. Most schools in the region were open as usual and phone and electricity services were restored, providers said, although hundreds of homes were without running water, broadcaster NHK said.

"There are no reports of deaths or people buried alive," top government spokesman Nobutaka Machimura told reporters. "But the prime minister has ordered us to continue checking."

At Choryuji temple in Hachinohe, one of the worst hit areas, rows of tall gravestones were knocked over and some were broken.

"It's such a shock to see this mess," said 77-year-old Toshikatsu Sawashiro, who came to check his family grave.

Thursday's tremor follows a string of earthquakes in the same region, the first of which in mid-June killed at least 10 people and left as many again missing.

About 200 people were stranded on board a train that was still halted more than eight hours after the quake hit. Service was suspended on some high-speed bullet train lines until later in the day.

Some stretches of expressway were briefly closed to traffic in the region, but they were later reopened, said a spokesman for the operators. Some smaller roads remained blocked by landslides.

Tohoku Electric and Tokyo Electric said their nuclear power plants in northern Japan had not been affected.

Fujitsu Ltd said it stopped production lines at a semiconductor factory in Iwate, and Toshiba Corp and NEC Corp said they had stopped chip plants for checks.

But Tohoku Electric said it restarted a 250-megawatt oil-fired power plant in Aomori that was shut down after the quake. Nippon Steel also restarted steel output at its Kamaishi works.

In October 2004, an earthquake with a magnitude of 6.8 struck the Niigata region in northern Japan, killing 65 people and injuring more than 3,000.