A recent survey reveals that Turkey's people are most concerned with democracy and hope to see that come out of the ballot box. 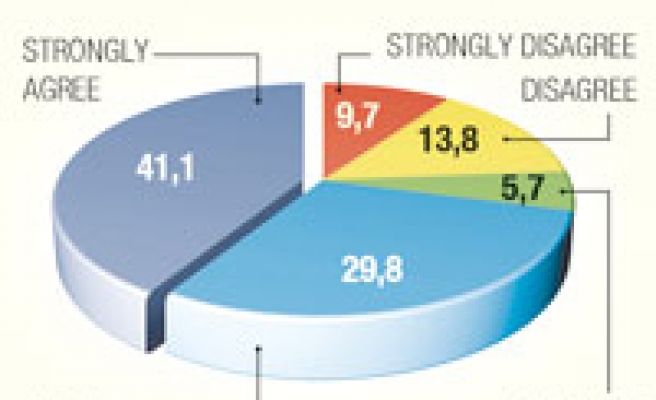 Turkey has made a fast entry into the general elections process with all participating political parties having turned in their lists of nominees to the Supreme Election Council (YSK) this past Monday.

As the July 22 election draws closer, increasing speculation, forecasts and polls claim to have taken the pulse of society. A recent survey reveals that Turkey's people are most concerned with democracy and hope to see that come out of the ballot box.

According to the survey people are very curious about how the recent crisis over the presidential ballot will be solved. Last month the Constitutional Court ruled that a vote in Parliament to elect a president was invalid, saying the number of legislators needed to participate in the voting was inadequate. The court's decision determined that at least 367 legislators must attend for the opening session of a presidential bal-lot in parliament to be valid.

Opposition parties boycotted the voting in order to stop the Justice and Development Party (AK Party), which holds the absolute majority in Parliament, but not the magic 367, from electing its own presidential nominee, Foreign Minister Abdullah Gül.

Later Parliament passed a constitutional amendment package allowing the president to be elected by popular vote; however this was returned by President Ahmet Necdet Sezer. Currently the question of how Turkey might elect its next president remains unanswered.


Public Survey 2007, conducted for Today’s Zaman by the Cihan Data Collection and Research Service across 26 provinces and among 11,926 respondents, used face-to-face interviews to inquire about people’s assessment of the recent political processes.

The survey, conducted between May 21 and May 27, revealed that the majority of Turkish people are angry about the presidential election process that ended with the Constitutional Court 367-quorum decision. Only 28.3 percent of respondents said they supported the opposition’s move to defer the first round of the canceled voting to the Constitutional Court, while 66.4 percent said they opposed it. An overwhelming 73.3 percent expressed belief that the 367 rule was “invented” specifically to keep the AK Party from voting in a presidential candidate. Overall 71 percent of respondents expressed support for presidential elections by popular vote.

The questionnaire also asked for respondents’ thoughts regarding the recent demonstrations which have come to be called the “republican rallies.” In these demonstrations hundreds of thousands marched in protest of the government to express concern about its religious past. As much as 64.3 percent said the rallies represented a “certain ideological unity,” compared to 23.3 percent who disagreed.

The survey also looked into general attitudes about recent party mergers within Turkish politics. A total of 31.3 percent of the respondents expressed a belief that a potential power consolidation between the Motherland Party (ANAVATAN) and the True Path Party (DYP) would be a sound alternative for the AK Party, while more than 58 percent did not feel such a coalition would be a good replacement. An overwhelming 80.5 percent said the two parties had considered an alliance only in an attempt to overcome the 10 percent parliamentary representation threshold. Those who believed the recently realized election alliance between the Republican People’s Party (CHP) and the Democratic Left Party (DSP) could be a sound alternative for the AK Party numbered 37.5 percent, with 49 percent not agreeing. More than 56 percent of respondents said the alliance of left parties came about because the two parties caved in to grassroots pressure for unification.