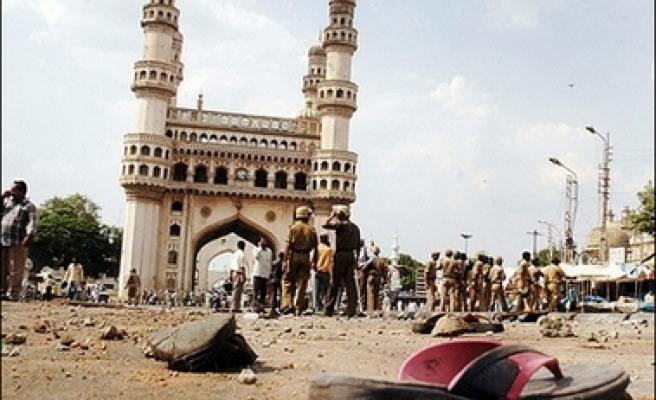 The suspect, a Muslim, was the first person picked up by police in connection with the bombing, and word of his detention came as police tightened security around the 17th century Mecca Masjid ahead of Friday prayers, which usually draws thousands of people.

A bomb went off at the mosque as Friday prayers were ending a week ago, killing 11 people. Another five people died in clashes that erupted after the blast between security forces and Muslim protesters who were angered by what they said was a lack of police protection.

The suspect, a 39-year-old kerosene dealer, was nabbed in Jalna, a city in western India, said a police official speaking on the condition of anonymity because the investigation is ongoing.

The official did not offer any further details about the suspect or the investigation.

At the Mecca Masjid, meanwhile, about 4,000 police officers backed by armored vehicles equipped with tear gas launchers were deployed to guard the structure at the first Friday prayers since the bombing.

Muslim leaders in Hyderabad have said they do not trust local police to handle the investigation into the bombing, and authorities in the city on Thursday asked Indian federal investigators to take over the case, although it was not clear when that would happen.

Last week's attack was the second time this year a mosque has been bombed in India.

On Sept. 8, a mosque in Malegaon, a city in western India, was bombed during a Muslim festival, killing 31 people.