Swiss Federal President Micheline Calmy-Rey voiced opposition against a campaign to block construction of minarets of mosques and described it "as a very very very bad idea as far as foreign policy is concerned." 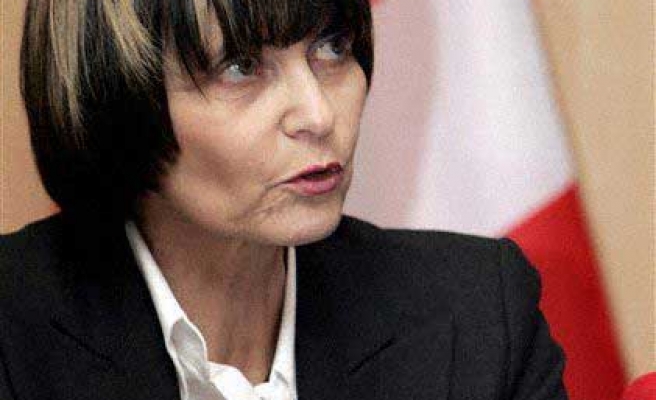 Swiss Federal President Micheline Calmy-Rey voiced opposition against a campaign to block construction of minarets of mosques and described it "as a very very very bad idea as far as foreign policy is concerned."

The Swiss president, in response to a question by Kuwait News Agency about her position on the issue, stressed that Switzerland is an open country that talks to everybody and acts as a bridge among civilizations, cultures and religions.

These efforts, she noted, threaten interests of Switzerland abroad and put the safety of the Swiss in danger.

"It is a question of freedom of religion and its practice which is a guaranteed issue in Switzerland and therefore the initiative to block the construction of minarets poses questions on conformity with the Swiss Constitution," she said.

Calmy-Rey noted that constructing minarets is in line with normal construction laws in Switzerland and that there is no reason to create exceptional laws.

The president was addressing reporters on the occasion of the annual dinner, held late on Monday, with the Association of Foreign Correspondents in Switzerland (APES).
On sidelines of the event, the UN special rapporteur for the right to food, Jean Ziegler, addressing the same issue, noted that the "initiative is unconstitutional." Ziegler, added to KUNA correspondent, that "such an initiative is a violation of the Swiss constitution." He added that the Swiss constitution guarantees freedom of religion. Islam is one of the foremost and very tolerant religions in the world, so to forbid the Muslims to have their own minarets and mosques is an insult to a great civilization and an absurdity from the point of view of world culture.

Ziegler noted that "we should be very happy to have as many mosques as possible in Switzerland because we need spirituality; we need the connection between the Islamic world and the Swiss identity." Above all, he added, there are more than 300,000 Muslims in Switzerland "so why shouldn't they have their own mosques? Their own cemeteries and their own cultural centers?" Ziegler stressed "we have to fight against this initiative and to eliminate it" and "we have to offer public money for the Muslim community as it is provided to build churches". "I am totally against this initiative, I will fight it and the Swiss Socialist party will fight it," he noted. This campaign, he added, "is clear racism and comes out through racism, and is a new form of racism in Europe." "They talk about anti-Semitism, this is even worse, this is anti-Islamism, and I think the Human Rights Council has to fight it," said Ziegler.

Ziegler described the campaign as a breach of the Swiss constitution, and added that on the cultural level, it is an absurdity and on the political level, it is a crime.
The extreme right in Switzerland is collecting 100,000 signatures to pave way for a referendum to block the construction of minarets in the country. Last Mod: 15 Mayıs 2007, 12:29
Add Comment